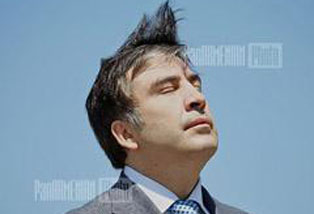 Unlike Europe, modern medical equipment is placed in the newly opened medical centers only during the opening ceremony and several hours later they disappear, but it is not a problem at all! This is only the  start; a lot of challenges are before us– 100 new hospitals shall be opened before the elections and it is the main point.

And one more significant point is how local people, mobilized by the local authority, greet Mikhail Saakashvili in every district. It is fact that each of Saakashvili’s trips is a holiday for each region.

It is miracle when, before your visit in every district animals are killed in the forest and birds in the sky. And when you can eat up everything in a short time and drink several bottles of lemonade without taking a breath. In parallel to it, your body guards cannot even approach the table much less eat there. Then you jump up from the table so that the local people do not realize what disaster had happened to them.

In short, all pre-election promises of Mikhail Saakashvili resemble each other and witnesses also tell similar stories.

Our respondent from Tskhaltubo also witnessed the president’s tour in his native town. We cannot publish his name because it would be a crime and hopefully media-ethics will forgive us.

Please, do not ask me how we can prove the anonymously told story, because we could not find more valid evidence about Mikhail Saakashvili’s visit in Guria (you might remember a small house in Guria where some theatrical props were exhibited).

So, here goes a story of a person from Tskaltubo and it is up to you to decide to believe it or not; particularly after you see the TV-story prepared by the Studio GNS.

-Mikhail Saakashvili visited Tskaltubo on the Christmas Day. He opened a new hospital; more exactly, the old one was renovated.

-How well is the hospital renovated?

-It is normally done but as you know medical equipment is purchased only for one region and, as it happens in every district, they were brought here only for the opening ceremony. They showed us how they operate and then uninstalled them; now they stored the equipment for another district hospital. They leave only beds which are also very precious gifts for us.

-Have they already taken the equipment from Tskaltubo too?

-Yes, they have. They brought it and took it away in one day… they video-record the opening ceremony and then take the equipment back. It happens everywhere… they did the same in Khashuri – nothing was left in the hospital several minutes after the opening ceremony.

-What about patients? Are they also placed in hospitals for a short time?

-I think patients remained in their beds… I hope they are not also transported to and fro. In short, they opened a hospital in similar way and then visited several residential buildings constructed for IDPs. In Tskaltubo we call this place a swamp because in the past, people grew silage there. It is damp place. Now, they constructed buildings there and people have to live in the damp and in disaster. Tskaltubo is a damp town – one rain can flood everything. They did the same thing as they did in the so-called ghettos in Tserovani.

-Who were the people who met Saakashvili?

-Some of them were local people; the rest were brought from other districts. Mostly, they mobilized people from public schools – teachers and pupils. Every teacher was previously warned about dismissal unless they met the president. So, they had to go there. There were several people selected who had to make speeches for Mikhail Saakashvili; they had even selected people who had to hug the president. A middle-age man, who greeted the president, is a former dance teacher. His “service” was soon appreciated and modern technique was taken to his house soon – plasmatic TV-set and other things.

But, I think Tskaltubo residents will always remember the final part of the presentation. After the national TV-Companies filmed Misha’s visit, a huge party was organized at the budget expense. 80 people were sitting at table in the restaurant. Of course, Imereti people did their best to demonstrate their hospitality and the Supra was full of delicious food – roe and bear shashliks [roast meat]. Mr. President was also there and he was eating fast with his two hands and ten fingers. In a very short space of time, he drank at least 4 bottles of lemonade but never used a glass.

The Supra lasted only a little while. People were looking at the President in surprise. The most interesting point is that when his own body guards were getting ready to join the Supra, Saakashvili jumped up and ran out. So, the guards had to follow him and people were very sorry for them. They follow him all day long and they cannot even have dinner. The members of the ruling National Movement, officials of the local administration, and honorable citizens of the town started joking about the fact. Misha’s visit in Tskaltubo finished with it and people remained happy with the event.

-How do Tskaltubo residents feel about it?

-They do hope something will change in this country. The feelings people display in TV are artificial. Of course, Misha has supporters but they make up the absolute minority. Furthermore, it is shameful in Tskaltubo to publicly support Misha. Simply, people work in budget-funded institutions and if they start complaining about the president, they will have to quit their jobs. Tskaltubo is a very poor district. It is not true that a hotel was opened there, that tourists come here and the town is flourishing. Nothing is happening here. There was one military resort-house in Tskaltubo which was somehow maintained even in the worst period of our country and it continues functioning. Today, they renovated it, changed the furniture. Besides that, they are going to repair a famous hotel for miners because when the parliament moves to Kutaisi, the MPs will live there.