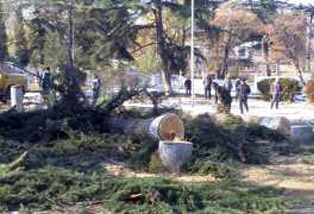 More and more trees have been cut down in Tbilisi recently. Despite public protest, trees have been cut down on Moscow Avenue, in Kikvidze Square, in Victory Park and finally on Baratashvili Street as well.  Sometimes trees are cut down to make way for police stations, but in Victory Park they were removed for the construction of a media library. Tbilisi City Hall claims that it was necessary to cut down the trees because they could not find alternative space for the police station.

Tbilisi citizens and members of nongovernmental organizations patrolled Kikvidze Square daily to protect its trees from being cut down, but despite their protests a police station is being built on the site.

According to lawyer Merab Chikovani, on March 27, 2009 Tbilisi City Council passed resolution # 4-13 on the exploitation of Tbilisi territory, approving regulations for construction. Article 19 of the document establishes recreational zones consisting of green territory located within the administrative borders of Tbilisi. The recreational zones are divided into categories: any kind of construction is prohibited in the first category while certain types of buildings can be constructed in the second and third categories. The document lists these types of buildings, however, police stations are not mentioned.

Merab Chikovani: “Kikvidze Garden and square at the end of Moscow Avenue is a recreational zone where police stations cannot be built. Construction work begun without any change in the status of the territories having been made. It requires a decision on the matter by Tbilisi authorities. A decision like that was never made.”

Chikovani added that those responsible for the work being carried out should both hold a construction permit and keep a record of any trees cut down. However, they had neither of these documents.

On February 1, MIA [Ministry of Internal Affairs] appealed to the Tbilisi Architecture Service to find out if they had any objections to construction work on the site. The Architecture Service processed their appeal and replied to the MIA that they were not against construction. The initial application letter clarified that construction was planned on Moscow Avenue, division line # 6; on Bogdan Khmelnitski Street plot N02/102; on Tsotne Dadiani Str. # 164 (Kikvidze Garden), and on Kerchi str. plot N 6.

The reasons for the Architecture Service’s decision not to decline the MIA construction permits is unclear. Especially since national legislation states that police stations cannot be constructed in recreational zones.

Giorgi Korkashvili, head of the Ecology and Greenery Planting Department at Tbilisi City Hall, said that although construction is prohibited in recreational zones, there was no other alternative in this particular case.

Giorgi Korkashvili: “Cutting down trees should not be our priority but when construction is stymied like this, some of the trees can be cut down. In return, the organization behind the construction is obliged to plant elsewhere ten times the number of trees cut down. Of course, constructing a police station in the area should be a priority. There is a need for police stations and that’s why they are being built all around Georgia. I cannot determine the location of the police station. That is something within the competence of the MIA.”

Giorgi Korkashvili added that there was no vacant space in the Gldani-Nadzaladevi district and no old empty building that could house a police station either. “If you find any, please let us know,” he said. According to Korkashvili, due to these circumstances, the issue was discussed by the Council and the area’s recreational status was changed.

Today, there are 8-10 sq. meters of greenery per capita in Tbilisi. The norm is about 25 sq. meters. According to City Hall, trees have been cut down in the capital for the construction of new roads on the embankment and Baratashvili Street, as well as for construction of new police stations. Giorgi Korkashvili said that there currently were no plans on cutting down trees in any other locations.

-We frequently plant new trees. We prefer to plant them in new districts where there is no greenery. We have already planted about 60 000 plants since our service was established (2009). Not long ago, we planted 120 cypresses; we cut down one cedar tree which was a potential hazard and three lime-trees which hindered new planting of cypresses.

-Why did you not leave the lime-trees in addition to planting the cypresses?

-Is it not better to maintain fully grown plants?

-Of course, it is our priority, but sometimes we have to cut them down. Our cutting down of trees does not take on massive proportions. In this particular case we planted 120 new plants and removed four.

-Where else do you plan to cut down trees?

-Nowhere at the moment. We are working on the shape of trees. We might remove several withered trees. We have already removed the necessary trees for road construction; we were constructing a tunnel there and there was no other way out. The city is overloaded with traffic. I do not think the plant life will benefit from smoke. We have cut down about 40 trees on Baratashvili Street and several trees on the embankment.

-But there is a law to be obeyed; by me, you and the MIA. The law states that nothing should be constructed in recreational zones.

-I agree but if it is a strategic facility and it is necessary to construct it in that particular place, the issue might be discussed by the Zoning Council which can change the status of the area. This council is a part of City Hall.

-Is a police station a strategic facility?

-I think it is. It is definitely strategic in terms of improving the situation with regards to crime in the country. I do not think people could peacefully rest in any park about 15 years ago.

-Does the law grant police stations the status of strategic facility?

-Let us discuss this issue from the other point of view. Before the media-library was constructed there, there was a golf-club which was not properly taken care of by the owner; the area turned into a garbage dump. The situation was the same in Mziuri; we removed 800 truckloads of garbage from there.

-Your department seems unable to refuse assigning plots to the MIA.

-Why do you think that? Do you think we approve every application? Try and apply to us and you will see if we approve your request.

-I am not speaking about myself. I am talking about the MIA.

-We have declined their applications as well.

-Could they not have constructed the media-library without removing trees?

-It was impossible. Do you think that our mission is to cut down trees, to destroy something, to cause problems and destroy the normal ecological situation?

-The answer is simple: You could build police stations in empty places.

-Find an empty place in Nadzaladevi district; if there is any, we could build the station there.

-Could they not purchase space in an already constructed building?

-You could find a building there. The population also wonders why it was necessary to cut down trees.

-The police station should meet some standards. The aim of our critics is to oppose us in whatever we do. Have they ever taken part in any activities? Have they ever assisted us? I cannot understand it. Why are we bad people and enemies of nature while they are model environmentalists? Why do they not say anything positive about our work?

Kakha Bakhtadze, program manager at the Caucasus Environmental NGO Network [CENN]: “The main problem is that nobody discussed the road-construction project beforehand. Another problem is finding out whether it was a priority with the population. The population and nongovernmental sector are not involved in the project management process. Decisions are made spontaneously without asking for opinions from experts – it was not necessary to build tunnels for the regulation of traffic movement. They could find other ways. For example, the traffic is heaviest in the morning because school starts in the morning. It would have been possible to change school-hours in different schools, etc. It is better to maintain the few fully grown trees left in the city than to plant new ones and spend hundreds of thousands of lari on it.”

Kakha Bakhtadze said that similar projects should be discussed publicly; meetings and discussions should beorganized, with relevant information made available on the City Hall website, leaving room for comments from the public.