Workshop for Journalists and Study Trip in Mleta 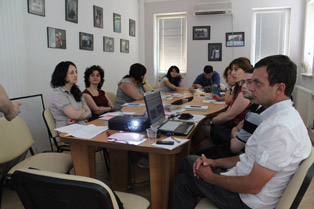 On June 14-15 Human Rights House Tbilisi organized a workshop and study trip for journalists on the topic – Natural Disasters and Eco-migrants.

Office of the Institute for War and Peace Reporting (IWPR) hosted the workshop on June 14. The workshop was led by Rezo Getiashvili from the Caucasian Environmental NGO Network, Giorgi Kupatadze from IWPR and Ilia Guchmanidze from the Association “Borjgalo”.

Study Trip was organized to one of the most problematic regions of Georgia – Mleta village in Dusheti district next day of the workshop, where participants developed their practical skills obtained on the previous day’s theoretical training and took responsibility to cover the issue in their media-outlets. The participants studied the problems of eco-migrants on the place, met representative of the local self-government Ioseb Zakaidze, who provided journalists with additional information about problems of victimized people in Mleta.

10 participants of workshop and study trip were selected through competition by the Human Rights House Tbilisi. About 40 journalists applied for the competition.