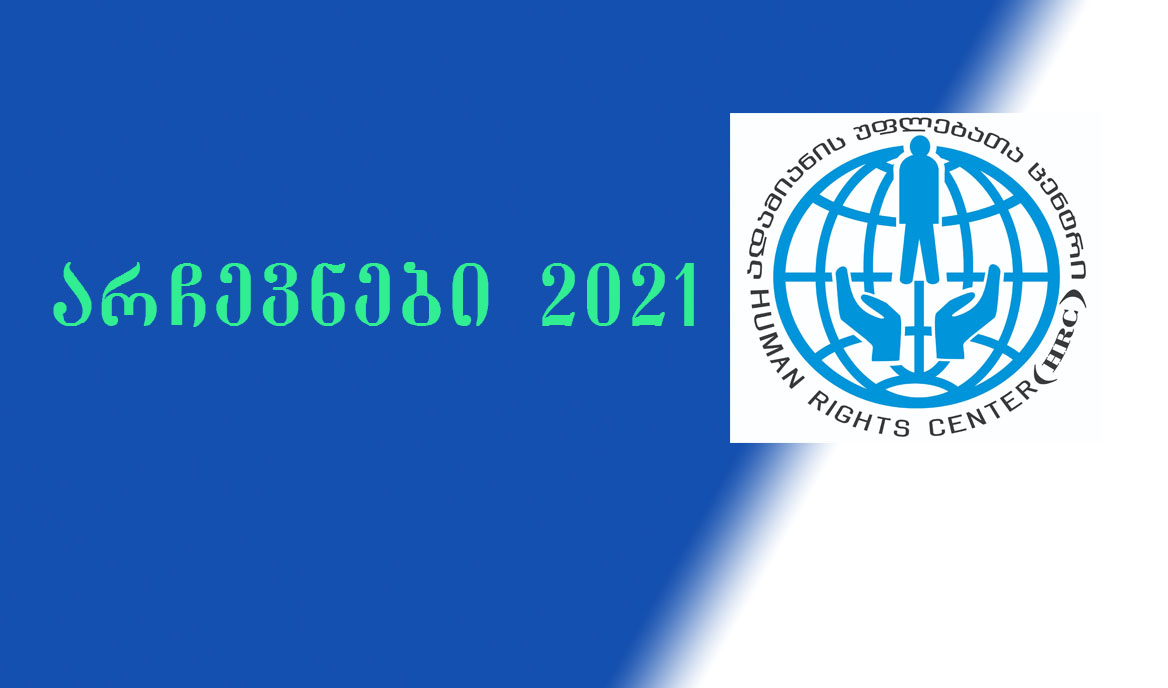 By 15:30 pm, the HRC monitors have already lodged 14 complaints and made 22 notes in the logbooks. The HRC will publish initial assessment of the polling process after the election is over.

Like during recent elections, big part of the election violations observed by the HRC observers during the 2020 Parliamentary Elections are caused by the low qualification of the PEC members that was very common tendency during the recent elections too. Fair remarks and complaints of the HRC observers about the violations and miscarriages of the PEC members and the chairpersons often irritate them and it creates tension and sometimes conflicts.

The HRC observers reported that they observe excessive activity and attempt to control the voters by the coordinators and agitators of the Georgian Dream in the vicinities of the polling stations. The Article 45 Part 12 of the Election Code of Georgia prohibits to physically obstruct the movement of voters in the polling station or within 100 meters of the polling station. On Election Day it is also forbidden to gather people or register voters within 100 meters from the polling station. The unlawful activities of the coordinators and representatives of the ruling party are not adequately monitored, controlled and reacted from the side of the state institutions. The police is responsible to eradicate similar illegal facts but the PEC chairpersons are authorized to inform the police about these violations that negatively affect the healthy election environment in the polling stations they supervise. However, frequently, the PEC chairpersons refrain from reporting about the incidents to the police and claim that it is not within their competence.

The Human Rights Center will file the registered complaints about the observed election violations to the District Election Commissions and to the Central Election Commission; in case of necessity Human Rights Center will appeal the court. The organization takes all necessary measures to react to all possible election violations.

1.    In the polling station # 61 in Tskaltubo Election District # 58 the voter discovered the name of the deceased member of his family in the voters’ list; he informed the observers and PEC members about it. The HRC observer will monitor the polling process until the end of the Election Day to prevent anybody to vote on behalf of the deceased person.

2.    In the polling station # 50 in the Sagarejo Election District # 11 the PEC chairperson hindered the activities of the observers. The observers lodged a complaint. The HRC observer handed the complaint to the Sagarejo DEC # 11.

3.    The similar situation is in the polling station # 39 in Sagarejo Election District # 11 too, where the PEC chairperson is even more aggressive and hinder the observers to conduct their duties. The complaint was prepared and the HRC observed lodged it in the Sagarejo DEC # 11.

4.    In the polling station # 48 in Marneuli Election District # 22 the PEC members tried to oppress the HRC observer demanding her not to make any notes or complaints about the violations. The HRC monitor observed that one voter voted twice but the PEC members did not allow her to video-record the violation and threatened with “breaking her fingers”. The observer had to call the Marneuli DEC # 22 and report about the incident. After the DEC representatives arrived in the precinct, the tense situation timely improved but after the left the situation again became chaotic. The HRC observer lodged a complaint in this polling station.

5.    A woman was standing at the entrance to the yard of the polling station # 3 of the Gardabani election district # 21, who was recording the names of all voters arriving at the precinct in her notebook. The observers several times rebuked her and asked to leave the area but in vain. According to the HRC monitor’s report, the police took the woman away from the yard at about 10:00 am but later she returned back. Consequently, the HRC observer had to call the patrol police and they took the woman away from the vicinities of the polling station.

The PEC Chairperson cannot establish order in the polling station

HRC observer reported that there is endless disorder in the polling station #51 in the Savaneti village, Bolnisi Municipality Election District # 23; the disorder is caused by the crowd mobilized in the precinct. The polling process is often delayed and there is a doubt that voting privacy is violated in the booths.

There were cases, when the representatives wearing the badges of various political parties tried to accompany the elderly voters into the booths.

The HRC monitor observed several violations in this particular precinct: organization “Youth Initiative for Democracy” had three representatives in the polling station that is violation of the Election Code. The HRC observer several times appealed the PEC chairperson to dismiss two representatives of the mentioned organization from the polling station that was initially satisfied; however, several members of the Youth Initiative for Democracy used to enter the polling station periodically, according to their statement because of bad weather. After the HRC observer made a note in the logbook, the PEC chairperson eradicated the problem.

At about 09:30 am, so-called coordinators of one of the political parties (supposedly of the Georgian Dream) were standing in the vicinities of the precinct # 51 of Savaneti village in Bolnisi municipality, who had controversy with the representatives of the polling company Edison Research. The controversy finished soon but the coordinators did not leave the area and actively tried to mobilize the voters in the polling station. They were looking for the numbers of the concrete voters in the voters’ lists.

The HRC observer several times asked the PEC chairperson to react to the violations but he has not eradicated the problems yet.

Darkness in the polling station in direct and indirect meaning

Before opening the polling station # 48 in Marneuli election district # 22, the HRC observer found that the election booths were arranged incorrectly. The observer several times requested the commission members to turn the booths over so that the privacy of the voting process would not be violated. Finally, the PEC members realized how the booths were to be arranged and the problem was eradicated before the polling station was open. This fact demonstrates the problems in the qualification of the PEC members.

***
Throughout the Election Day, Human Rights Center will prepare and disseminate information about alleged election violations observed in different election precincts in the mentioned regions. The executive director of the HRC will hold three briefings at 11:30 am, at 16:30 pm and at 22:00 pm in the Election Media Center, which was opened with the support of the Open Society Foundation Georgia. The information reported by the HRC observers will be published on the online newspaper of the HRC – www.humanrights.ge in Georgian and English languages and shared on the HRC’s facebook page https://www.facebook.com/humanrights.ge.

In the frame of the election projects, the HRC monitored the pre-election period too through long-term observers. During the pre-election period the monitoring will cover following issues: use of administrative resources for electoral purposes, staffing of election commissions, pressure on voters, coercion and bribery, cases of intimidation, threats and violence against electoral subjects and other possible significant violations.

On October 1, Human Rights Center published the newsletter, which summarizes the tendencies and findings from the pre-election period monitoring.

On October 1, Human Rights Center and the International Federation for Human Rights (FIDH) also disseminated a joint statement, which evaluates the political context of the pre-election period, issues related with the judiciary independence including the court proceedings into the alleged politically motivated cases, the issues related with the freedom of assembly and alarming facts of the illegal surveillance. Human Rights Center is the FIDH member organization in Georgia.

HRC monitors the October 2, 2021 Municipal Elections within the framework of the projects supported by the Open Society Foundation and the Black Sea Trust for Regional Cooperation.