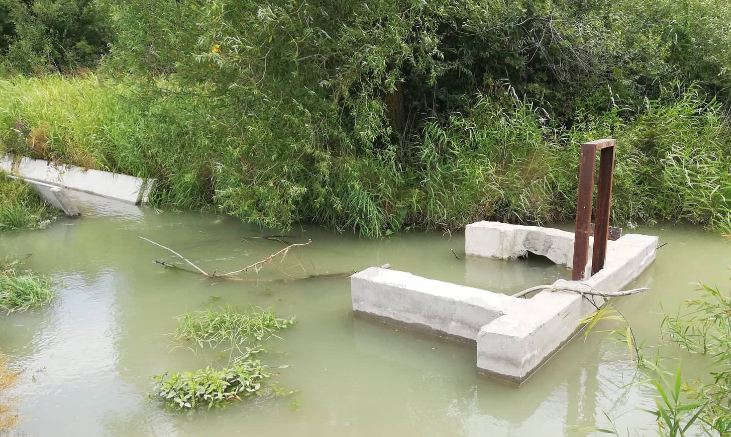 In the village of Adzvi, located in the Gori municipality, the police did not allow Human Rights Center to see the water conduit which according to the locals had been polluted. The NGO sector and media often speak about the unjustified restrictions existing on movements near the boundary line.

"The water is supplied according to the schedule i.e., every other day. Yet, the water is polluted. The water conduit is damped, inhabited with reptiles. You can see the situation yourself. We are in a bad situation,” the locals shared this with HRC representatives visiting the village of Adzvi.

After that, the police did not allow the representatives of HRC to check the water conduit on the spot, even though the conduit is located hundreds of meters away the boundary line. "We cannot let you approach the water reservoir. We have orders to do so because of your security,” said the police.

The police could not specify what kind of order they were referring to. They could not name the issuing authority or official, nor the details of the order.

According to HRC, there is a high probability that the police act arbitrarily.

"The actions of the law-enforcement officers and their responses to our questions create doubts that there is no official document regulating the pattern of behavior of civilians in the way the officers were demanding from us. Consequently, there is a high probability that they would act arbitrarily according to their own views," states Alex Merebashvili, a lawyer within HRC.

Nino Tsagareishvili, co-director of HRC believes that existing practice is a restriction on the freedom of movement:  "Such a restriction is not provided by any normative act. Therefore, it is illegal and infringes the freedom of movement. We, the representatives of HRC often visit the villages adjacent to the occupation line to study the problems on the ground and talk with the local population. The residents of the villages share with us a lot of problems. Beside the problems caused by occupation, there are severe socio-economic and livelihood problems. Therefore, it is essentially important to give the representatives of HRC the opportunity to freely enter the villages and study the situation on the ground. The restriction on movement hinders our activities in this regard."

The problem of restricting the movement also hurts the media. Giorgi Akhalkatsi, a reporter for Mtavari Arkhi believes this is one of the clear examples of interfering with journalistic activities. According to him, the response is not clear on the part of the state saying that the restriction is due to the security reasons.

"There are occasions when we are not allowed to enter the villages that do not border the boundary line. The police would go with us everywhere until we leave the territory adjacent to the non-existent border. For example, I visited the village of Kirbali a few days ago. I filmed some of the locals and returned soon. I thought I would leave the village and do live reporting from the road. I left Kirbali and stopped on Gori-Mejvriskhevi Road. The police were following us. Almost for an hour I was waiting for my turn to do live and during this time the set of police was nearby watching us.  Once we finished live, the police were following us until the village of Kheltubani. Besides the fact that we are directly or indirectly hindered in our work, I believe the state resources are spent inefficiently and this vicious practice should be changed,” states Giorgi   Akhalkatsi.

Qartli.ge editor Saba Tsitsikashvili compares the work of reporters at the boundary line to “remand in custody under the police surveillance.” Tsitsikashvili believes this is an attempt to restrict media.

"In fact, you are working with police officers which is a very unpleasant process for both the journalist and respondent. Sometimes there is such an awkward situation that you must explain to the population that you are working independently from the police. You are doing the job the police try to control. When you enter the villages, you undergo the procedures that take time and misuse the resources. This pattern is an attempt to restrict media in every sense. One thing is when the police cares about your safety, and the other thing is when the police is interested what you do and how you work,” says Saba Tsitsikashvili.

HRC sent an official letter to the Ministry of Internal Affairs and the State Security Service. HRC requested a response from the agencies as to why the movement to the villages near the boundary line is restricted and whether there is a relevant normative act regulating the issue.

The State Security Service responded to the HRC letter. The agency states that the central government of Georgia does not restrict movement along the occupation line. However, SSS also explains that the police take into account the situation on the ground and thus protect the security of civilians.

HRC also received a written response from the Ministry of Internal Affairs (MIA). A letter signed by Tatia Tsetskhladze, acting head of the MIA administration (department) says that "according to articles 25 and 26 of the Law of Georgia on Police, the police officer may: Request a person to leave a certain place for a specified time or prohibit him/her from entering a particular area if it is necessary to avoid danger; temporarily restrict movement of a person as well as that of a vehicle in order to avoid a danger; temporarily restrict the actual possession of an item”.

Further, the MIA letter explains that issues related to the protection of public security and order along the occupation line are also regulated by acts that are classified.

According to Nino Tsagareishvili, co-director of HRC, any restriction of human rights should meet the principle of legal certainty – i.e. it must be foreseeable to a person as to what is forbidden, what is restricted, what is required from him/her, etc. Where the restriction is imposed by a legal act that is classified, such restriction obviously cannot be foreseeable.

According to Aleksi Merebashvili,  lawyer at HRC,  the  letters received from MIA and the State Security Service proved our doubts that such   orders    do not exist and  the police restrict  the freedom of movement in an unjustified and arbitrary manner:  "Reference to some classified orders by the Ministry of Internal Affairs is an attempt to  avoid   exposure   of police officers as liars as the Ministry usually justifies the conduct of the police by reference to the Law on Police and not with the existence of classified orders. Certainly, there would be some classified orders, but they would not deal with the issues of movement of civilians and with the procedure of agreeing such movement with MIA by a civilian; the classified orders would be of internal regulatory character concerning the identities of the persons on duty at the checkpoints, the rules and terms of patrolling etc."

HRC supports the investigation carried out by the International Criminal Court into the international crimes committed during 2008 August War, as well as those affected by the War. HRC also monitors the ongoing human rights violations committed near the boundary line and provides legal aid to the victims of the 2008 August War.