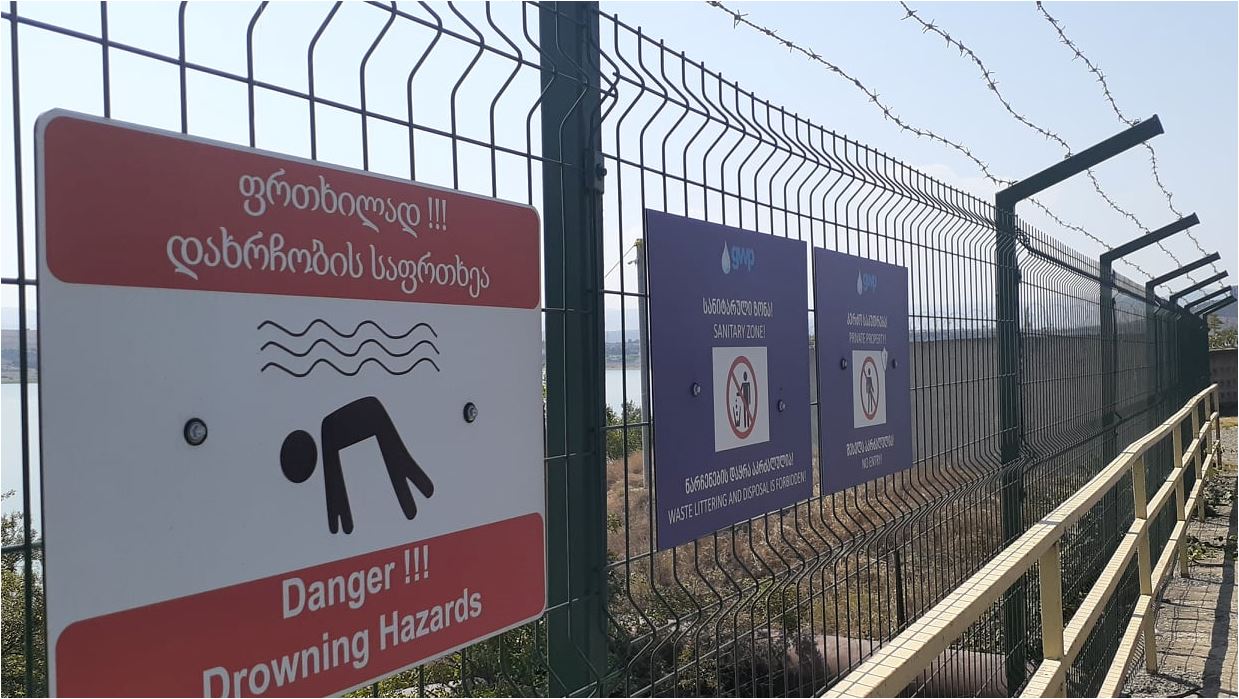 On October 20, Tbilisi Appellate Court will resume hearing of the administrative claim of HRC Executive Director Aleko Tskitishvili. The above claim against water supply company GWP is being heard in common courts of Georgia since 2017 but the final judgment has never been reached.

On July 3, 2017, the son of Aleko Tskitishvili, 15-year-old Tsotne Tskitishvili was drowned in Tbilisi reservoir near the so-called waterfall. The area is under the responsibility of Tbilisi City Hall and the water supply Company GWP. At that time, the dangerous place, which is truly named as "death zone", had no fence or restricting and warning banners.

However, in the meantime, before the Civil Cases Panel has heard the case, in Spring 2022, at the court hearing in Tbilisi Court of Appeals the claimant was informed that the respondent satisfied the claim - erecting a firm fence of concrete and iron around the area and placing the banners forbidding swimming - which was already the action ruled  under the judgment of the first instance court.  However, the representatives of the respondents - Tbilisi City Hall and GWP - could name the agent who carried out these works on the site. At one of the hearings, the GWP representative stated that the area was fenced by them “at the request” of Tbilisi City Hall. At the request of the plaintiff, GWP presented relevant documents to the court.
The case files read as follows: On April 15, 2021, the Infrastructure Office within Tbilisi City Hall was informed that GWP was carrying out fencing works around the buffer zone of Tbilisi Sea. Therefore, Tbilisi City Hall requested GWP to include the plot owned by the city in the fencing project implemented around the canal joining Tbilisi Sea.

Since one of the main claims was satisfied, the plaintiff withdrew the civil claim in the part of demanding from GWR to erect a fence around the buffer zone adjacent to Tbilisi Sea. The statement of claim read as follows: “GWP to be instructed to erect a fence of solid structure of 2.5 m height with barbed wire around the territory under its ownership taking in consideration the dividing lines, further, to install information banner indicating that swimming is forbidden due to the risks. Uninterrupted video monitoring to be conducted on the site."

By visiting the site, the plaintiff confirmed that the main part of the claim is satisfied, however the issue of uninterrupted video monitoring still has to be determined. In particular, there was a banner reading “video surveillance is on", but the reality of monitoring has to be ascertained. Further, fishers can easily get inside the fenced territory which does not exclude the possibility of using this area by juveniles.

Moreover, during the hearings of the claim, the plaintiff was not in the position to demand the compensation for damages as this claim was adjudicated by the Administrative Cases Panel. Moreover, no dispute is allowed between the courts on the matter of jurisdiction.

The position of Tbilisi City Hall was rigid from the very beginning. The City Hall refused to admit the claim in any part. However, the City Hall placed a banner from paper on the coast the security of which was impugned - the paper was blown with a wind next week.

The plaintiff offered to Tbilisi City Hall during the administrative hearings in Tbilisi City Court to set up a working group that would ensure in a short time erecting the barriers and installing warning banners. The City Hall did not wish to enter in any kind of negotiations with the plaintiff and instead argued that only the victims are responsible themselves for the incidents that take place on the dangerous site of Tbilisi Sea.

At this stage, the dispute is continued in the appellate court under the administrative procedure. The Administrative Cases Panel of Tbilisi City Court granted the main claim of the plaintiff i.e., to build the barriers around the dangerous territory and install warning banners. Thus, the respondents satisfied the claim on the fifth year of filing the claim. The issue of compensation for moral damages remains unsolved. For the plaintiff and HRC, it is important Tbilisi City Hall and GWP to be imposed with GEL 50 000 in moral damages. Only in this way it would be possible for the defendants to acknowledge their responsibility - vis-à-vis the families of the juveniles deceased in this area - which remains unadmitted by them. Moreover, Aleko Tskitishvili intends to spend the money on building a well-designed parkour park in Tbilisi, which was the dream of his deceased son.