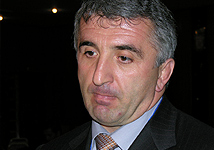 Near the restaurant “White House” on the left side of the river Mtkvari, majority deputy from Khashuri Region, Valeri Gelashvili was attacked by 8 persons in masks, while driving by car. Concerning the above mentioned fact the statement was made by the Leaders of Opposition who blame the government. ”I know that few weeks earlier Valeri Gelashvili was threatened by phone calls. They demanded from him to say publicly that he was sorry for his words. Even though Gelashvili begges his pardon, threat was still activated”- said the member of the Republican Party, Tina Xidasheli. Both jaws of the victim were broken and his face was damaged as well.

On the left side of the river Mtkvari, near the restaurant “White House” while driving his car, majority deputy from Khashuri Region, Valeri Gelashvili was attacked by 8 persons in masks. There were security guards Malkhaz Tsakaia and Gelashvili’s cousin, the  director of building company “Evra” Megi Lomidze in the car. Gelashvili was harmed most of all, but security guard was slightly hurt. They didn’t touch the lady; she was just asked by use of gun to stand on one place when she tried to run. Officially only one thing is known that two “Opel-omega” cars stopped the MP car. Robbers took hand bag of Megi Lomidze and personal documents of Gelashvili.

Even though, the victim and members of his party crossed out the possibility of robbery, the investigator of Didube-Chugureti police region, Levan Berodze, stated that it was only an act of robbery after questioning some witnesses an hour later from the incident. Investigation continues working on this version. But, it should be mentioned that the attackers did not take the golden chain of the victim.

On June the 14-th Gelashvili was driving his wife’s car, because his bullet-proof car didn’t start in the morning. According to the representative of the opposition party, on June 13 police stopped Gulashvili’s car and checked how many bodyguards he had and how well they were armed. In one of television interviews, victim stated that it was made y Special Forces and it was connected to his latest newspaper and television interviews. He recognized one of the robbers - the worker of the 8-th division of Internal Affairs Ministry.

Valeri Gelashvili owns three-stored modern houses in Avlabari, on alvani street # 5, near the building house of the president. As it’s known, by Gelashvili this house was granted to the government with the cost of 4 million dollars. Government refuses this fact. If Saakashvili do not fulfill the agreement, Gelashvili will sell the house on an auction. Concerning this argument, Gelashvili in one of his newspaper interviews used insulting phrases towards the personal life of president Saakashvili.

The above mentioned incident caused bad reaction from the sides of opposition parties; especially Republican Party, the member of which became Businessman Gelashvili two months ago. “Government should be responsible for this incident”- stated David Berdzenishvili, one of the republicans. leader of New Righters made a statement in one of the television interviews where he clearly blamed the government: ”It was beforehand planned terrorism act organized by the government.”

Tina Khidasheli, the member of the Republican Party, made a very significant comment to her interview with “Human rights information and documentation Centre”: “I know that about two weeks ago, Valeri Gelashvili was threatened by phone call. They demanded from him to bag pardon publicly. Even though, Gelashvili said that he was sorry, threat was still examined”.

Special Briefing was held by the representatives of National Movement, Giga Bokeria and Giorgi Arveladze. “It is very significant for us to investigate this crime and to find out the person standing behind it. We demand from government to investigate this case appropriately, as our opponents automatically accuse the government”, - stated the Member of Parliamentary majority, Giga Bokeria to “Media News”. Parliamentary Giorgi Arveladze, stands for the government and states that blames from the side of Opposition concerning criminalization of government is nothing else than “dirty statement”. He says that “Goal of Opposition is to blame government in every dirty work. It is their choice. Opposition can talk about everything and even to say such kind of shameless statement but we are used to it. We hope that investigation will find out everything.”(Media News)

In the hospital, the victim from rural party was visited only by Nino Burjanadze, the Head of the Georgian parliament.” As soon as I found out what had happened, I immediately called Vano Merabishvili, the Minister of Internal Affairs. I can insure you that police will do everything to open up this crime in the shortest period of time. It is really tragical fact, when deputy is beaten during daytime in the street. More horrible things may happen to ordinary citizen”- stated Nino Burjanadze to “Media News”.

With critical health situation Gelashvili, at first, was brought to St. Michael hospital. Both of his jaws are broken, his face is damaged. But now victim’s health situation is stable. The beaten deputy was flown to Vilnius by the special airline. After getting better, the deputy is going to return to active politics.