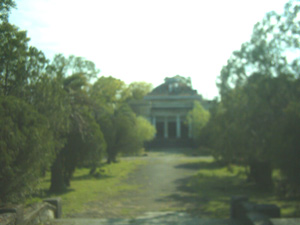 Inga Gvasalia, Samegrelo
Once people called it the “cemetery of crutches”; now the resort-house “Menji” is completely destroyed. The process started several years ago. Initially, the members of the military formation “Mkhedrioni” and Guardia-men, who lived in it for some time, destroyed it; after the Georgian-Abkhaz armed conflict in 1990s the IDPs from Abkhazia sheltered in the buildings of the resort-house.  The property, which survived the civil war, was sacrificed to the negligence of the directors of the resort-house.

Balneology resort-house “Menji” was famous with its sulfur, chloride-sodium water. The water is used for joints, periphery nervous-system, gynecological diseases and various illnesses of the blood-system. In the old time, the resort-house in Menji was well-equipped with its hospital and policlinic. The resort season lasted all year long non-stop.

Maia Sakhokia has been running the resort-house Menji for the last five years. The deconstruction of the infrastructure continues during her governance too. According to unofficial information, the local administration of Senaki district requested the Ministry of Economic Development to save the resort-house from final deconstruction but apparently nobody cares about balneology in the government yet.

We were told at the district administration that the agency of the enterprise management spoke about the dismissal of Maia Sakhokia but apparently she has serious protectors among high-ranking officials and she still keeps her position.

Several complaints were filed to the Senaki district tax service department about the deconstruction of the resort-house and about the sale of its parts. However, the head of the tax service Tengo Lomia clarified that Sakhokia has right to deconstruct the buildings. According to the decision of February 11 issued by the agency for enterprise management, the buildings of the former policlinic and common block were written off. Maia Sakhokia started to dismantle the buildings. The district tax service department got interested into the process particularly after a complaint was filed to their agency.

The former employees of the resort-house cannot be indifferent to the ongoing process in the resort-house and applied to corresponding institutions. Maia Sakhokia went to Tbilisi and returned to Menji with the new permission on deconstruction.

Maia Sakhokia thinks that she has never breached the law. “First of all, I paid 5 400 GEL for the registration of the resort-house. When I occupied this position, I did not find anything valuable here. Everything was already destroyed; I could not find even a chair here. All the permissions I had were acceptable for the tax inspection and we agreed to prepare the institution for the auction. We have to cover the debts.”

The director categorically denies the information about selling the construction materials after deconstruction of the buildings. “There was nothing to be sold in the resort-house; everything was spoilt here. The bathroom was partly covered with the roof. Everybody knows that Russian army had checkpoints here and they used the roof for it.”

Poti regional center of the revenue department within the Ministry of Finances deny the statements of Maia Sakhokia. They said Sakhokia had no right to sell the construction materials because the property of the resort-house has been mortgaged since 2003 because of debts. The director did not have right to sell the property without their permission.

“The resort-house has been mortgaged. Any organization, both governmental and non-governmental, receives a message after it is mortgaged which states that it cannot be sold or assigned to the other owner. In this concrete case, the director could not apply to us for any permission because the resort-house is a state property and belongs to the ministry of economic development. The property management agency had to apply to us for the permission. If something is to be sold, it should be sold in accordance to the law,” said representatives of the tax service department.

It is strange based on which documents the agency released the permission on the deconstruction of the resort-house. And what really happened in this concrete case – incompetence, indifference or financial interests?

There is no perspective to restore the unique resort-house; however soon it will be finally destroyed.