IDPs Protesting against the New Wave of Evictions 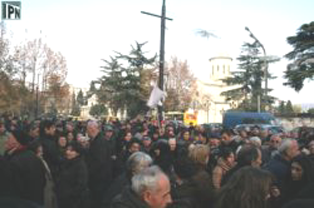 Bakurtsikhe, Lesichine, Potskhoetseri, Chkaduashi, Narazeni, Abashispiri – these are the villages where the IDPs are going to be moved to once again. The eviction and forceful displacement to the regions from 30 compact settlement places of Tbilisi was planned for December 26th, but as a result of the protest rallies and activity of civil society, the government stopped this process till January 15th.

“The IDPs will meet New Year in front of the Ministry of Refugees and Accommodation,” – stated Lasha Chkhartishvili at the protest rally held in front of the Parliament on December 21st.

According to Chkhartishvili, the IDPs want to catch the attention of the whole world by this decision: “The world must know that when the government representatives are meeting New Year in the comfortable environment, the IDPs are on the streets and they do not even have the house.”

IDPs state that they will not agree to move to these villages. The reasons are said to be health state and the absence of living conditions.

As the head of the IDPs settled in the #185 public school Levan Gvarmiani states to Human Rights Center, the locals are selling their houses in these villages and are moving to cities: “There are no water and canalization constructions, no fruitful land and no life perspective at all.”

One of the leaders of Georgian Party, Sozar Subar agrees with this opinion and notes that the houses offered to the IDPs are really unfit for living.

The participant of the protest rally held in front of the Ministry of Refugees Zaira Charkviani states that government lies to them: “The alternative residence place practically does not exist. There was an offering from Rustavi. However, the IDPs who came there were not given these places since it was the private property of concrete individuals.”

According to IDPs, there are no residence places in the offered villages either. Some other refugees who came to Tbilisi from there stated that they had to live under rent as there was no residence place provided for them.

One of the leaders of People’s Party Aleko Shalamberidze confirms this information: “The clear example of this is the fact that the IDPs were brought to Poti and they had to spend the whole night on the streets since they were not provided with any residence place.”

The IDPs met new wave of eviction with protest rallies. The protest rallies were held in front of the Parliament on December 17th and 21st. The already evicted IDPs were among the participants. They were asking government to stop this process and grant residence places to the evicted IDPs in Tbilisi.

Human Rights Center declared solidarity to the IDPs. As the executive director of the Center Ucha Nanuashvili stated, government should change its policy and start dialogue with the IDPs. Human Rights Center issued special appeal concerning the case of IDPs. (See the link: http://humanrights.ge/index.php?a=main&pid=12694&lang=geo )