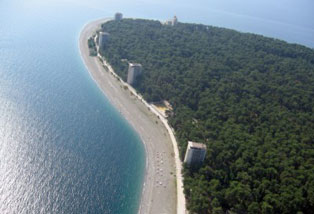 Georgian, Abkhaz and Ossetian journalists met in North Cyprus on September 12-17; the opportunities about tourism development in conflict areas were one of the main topics of their discussions.

Island state of Cyprus in the Mediterranean Sea, which is almost as big as Abkhazia, was divided into two – Greek and Turkish parts – as a result of Turkish annexation. Later, Greek part of Cyprus joined EU but Turkish part was recognized independent only by Turkey so far.

Although it is not recognized, the North Cyprus is well-developed country. New residential houses are actively built there. The Cyprus is a resort and its main income should rely on tourism. But, as Doctor Erol Kaymak from the Eastern Mediterranean University said, the North Cyprus largely depends on Turkish donation and the conflict is still unresolved.

According to Erol Kaymak, many new hotels were built in the North Cyprus. However, the situation is not properly managed in this direction because mafia controls the entertainment industry there.

Aleksandre Polishuk, student from the North Cyprus: “I am a student and spend most of my time in students’ dormitory. When I go to the city center, I see attractive environment for tourists but it does not impact on their number anyway. There are fewer tourists than there should have been. Tourists mostly go to the South Cyprus and then come here to see both parts of the island.”

The conflict situations significantly hinder development in other tourist regions throughout the world. Editor of the www.abkhazia.travel Zoya Chacha said life during first years soon after the war in Abkhazia was particularly difficult for local people; tourists were afraid to arrive there and locals could not offer much to them either.

Zoya Chacha: “Recently, in parallel to economic development, the situation has changed; new hotels were built; old ones were rehabilitated. There are many private hostels where quite a high-level service is offered.”

Zoya Chacha said people arrive in Abkhazia to rest together with their families and children. They also have several-day tourists who visit Abkhazia only for sightseeing; they mostly go to the mountains; to New Athos Cave, Pitsunda, Lake Ritsa and Pitsunda Cathedral; the Sokhumi Boulevard was also renovated.

“In Abkhazia, tourists like fresh air and the sea. We do not have proper infrastructure, like casinos, etc where they could entertain. So, people mostly come there to rest with their families,” Chacha said.

She added that Gagra is the most popular resort in Abkhazia. There are several new hotels there; old hotels were renovated in Pitsunda too; however, there were not enough funds for complete renovation. System of hotel certification does not work in Abkhazia; so, it is difficult to identify the number of service-stars in each hotel. As for price, one room costs 8-12 USD in private hostels and 45-150 USD in hotels.

Zoya Chacha: “Nowadays we have tourists from the middle class. We try to attract rich tourists but it will need time. Somebody should invest money in tourism for its future development. Now, we do not have funds so it cannot be developed. On the other hand, due to its low level, the profit is also meager.”