Ivanishvili’s First Steps in Politics – Attack against Experts and Journalists 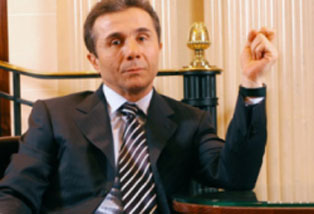 Businessman Bidzina Ivanishvili who disseminated statement regarding the establishment of new political party makes explanations in his new letter regarding the accusations expressed against media. Besides, Ivanishvili talks about unhealthy impact of pseudo-objectivity on the public life and criticized independent experts.

“Today when the deceitful machine works on full force to brainwash people and tries to turn the pseudo-reality into the reality it is hard to discern who is lying and who is not! By the input of government a big and mobile group of experts, political scientists, analysts and social scientists has been established which tries to voice the scenario written by the government and present black as white and vice versa. We hear these people every day from the television screens, we read their letters and interviews which serve to hush up the truth and deprive people of making right choices and conclusions,” – the letters state.

Businessman states that the colored group of pseudo-objective individuals is rich. However, he names “several individuals especially distinguished with talent.”

“First of all I would like to name Ia Antadze – especially distinguished lady, a good analyst, who sometimes very skillfully and in a disguised way serves the government’s interests. Not too long ago Ia Antadze called me a pro-Russian force without any arguments and declared Saakashvili an apologist of pro-western, liberal values. Ia Antadze can call me whatever she wants, I will not be offended, but how can you see liberalism and pro-western values in Saakashvili who established authoritarian regime in Georgia? When you have authority, when the public knows you as qualified and honest journalist and you make conclusions like that, it equals to crime,” – the letter states.

Businessman notes that “Soso Tsintsadze’s primitive and balderdash opinions are less dangerous since they are weak and biased and one does not even have to pay attention to them.”

“But when a clever person gifted with analytical talent like Ramaz Sakvarelidze shows inclination to double standards, this is alarming. I was listening to the discussion between Ramaz Sakvarelidze and Paata Zakareishvili. Paata Zakareishvili is no doubt an intelligent and smart politician, an emotional individual and expressed his opinions in an emotional way and Sakvarelidze “calmed him down” – told him not to worry and that he was with doctor. He repeated this phrase twice that looks more like hooliganism than the conduct of an intelligent individual. Ramaz who was in ecstasy said that oppossition has the same accountability to people that the government does. Zakareishvili gave him sufficient answer. Our society might be really sick by so much lie and psychological pressure, but it can be healed only by truth and not by cynicism and beautifully wrapped lie,” – the letter notes.

As Ivanishvili states “it is time to say truth.”

“If we want to heal our country from the half-dead state and shock, first of all we need to say truth and the one who is not Kakhaber should not be called Kakhaber,” – the open letter states.

According to Ivanishvili, his statement evoked special boom and he considered it was necessary to make several explanations on this issue.

“The truth is bitter. But if we do not get used to face it, we are predestined for constant fear and lie. I ask journalists of Maestro and its administration or founders – when the pseudo-oppositionists Erosi Kitsmarishvili manages television, an individual who graved the real choice of people according to his own acknowledgement in 2008, how can someone have an illusion that such person can be a guarantee of free speech?” – Ivanishvili states.

Businessman proposes several offerings: “I am ready to take on all the financial obligations which the abovementioned individual fulfills (or does not fulfill) before you; to sign an agreement of guarantee of editorial independence which will ensure freedom of journalist even in case of critical attitude towards my personal activity; all journalists for who free speech and professional dignity are valuable will be employed. Together we can create environment when people will be free of pseudo-welfare; together we can return government to people and start it with the fourth government by you.”

“Shalva, when you were making Dardubala I was living in Paris with my family. Every new show of Dardubala was a real holiday, a real firework of talent. You were a real role model both for me and my family and whole Georgia who presented the dead environment of our country with extraordinary talent and directly told people that living in such a swamp is insulting to human dignity. What happened to you today Shalva? You, an individual gifted with such talent how can you serve ungifted people? Gift is a grace from God and you are spending it in the service of these worthless men? Shalva, cannot you notice that you becoming more like Dardubala characters that you yourself created? You should be starting new Dardubala and instead you are running up and down like a servant boy. Come with me Shalva and start making new Dardubala the plot of which is a lot harsher than old Dardubala with new odious characters. The life gave you this chance for free and you are lazy to pick it up. I am giving you a public word, you start making new Dardubala and I will finance it!” – Ivanishvili states.

According to businessman, an excellent board of journalists works in Maestro and he is worried about the situation they are in.

“I am extremely sorry that Eka Beridze, extraordinarily talented journalist distinguished with civil accountability and conscientiousness loses time for Maestro. There is only solution from this situation: leave these false televisions and I will give you employment guarantee!” – Ivanishvili states.

Businessman addressed the head of TV Company Caucasia Davit Akubardia and states that he is an educated man, however he often betrays his principles and by different motives and reasons gives field to pseudo-objective subjects.

“Now I would like to appeal to Davit Akubardia - Mr. Aku, like Georgian people call him. Mr. Davit, I remember your June 30 program when you rebuked and blamed Christian-Democrats and Mamuka Katsitadze [the New Rights] in political flattery. You were perfect and your arguments were very convincing; your position was completely correct. On the same evening you invited Erosi Kitsmarishvili to your program but your speech was incredibly depressed, false, and weak unlike the previous program; it was evident that you were implementing somebody’s order. Mr. Davit, you are clever and smart journalist who knows economics, history, and literature on professional level and is fully aware of political affairs; but you often betray yourself, your principles and allow pseudo-oppositional, pseudo-impartial persons to speak up because of various motives and reasons. Mr. Davit, I do not need your Kavkasia – neither sell it to me nor give it to me as a present; but, please, be unbiased, true and impartial not only every other day but every day during 24 hours. Do you have financial problems? I do not need anything from you; I can help you without any pre-conditions but please do not sell your freedom and faith to scum people,” said Ivanishvili.

The businessman added that his statements about the purchase of TV-Companies Kavkasia and Maestro were incorrectly understood by certain people. Ivanishvili clarified that he is not going to purchase journalists; he intends to liberate them from insulting atmosphere which restricts their creativity and independence but they have to work in this environment now.

“My statements about Georgian mass-media aimed to prove the society that in fact Saakashvili controls the so-called oppositionist TV-Companies and their owners never make any decisions without his [Saakashvili’s] approval – the owners of the organization proved by their comments that Saakashvili is real owner of their organizations,” said Ivanishvili.

According to the open letter, Bidzina Ivanishvili intends to cooperate with the Georgian Republic Party and Free Democrats. Ivanishvili’s open letter states that the Republic Party is one of the most experienced and steeled party with huge political background, perfect intellectual resource and clearly silhouetted political leaders.

The businessman thinks that Free Democrats is a modern, interesting and promising political organization; their leader Irakli Alasania is one of the most valuable and considerable political figure in Georgia. Ivanishvili said he has no questions and complaints about Republic Party, Irakli Alasania and his party.

“Of course, I cannot list every politician and political organization who I will cooperate with. Soon, everything will be arranged and the list of our future partners will also be clarified. I will be pleased to cooperate with the Republic Party but to my great surprise, after my first statement, several representatives of the party made aggressive comments about me. I would like to ask Levan Berdzenishvili, one of the founders of the Republic Party: When the government attacked us via Alia Holding and imposed nasty accusations over me, Levan Berdzenishvili hesitated when evaluating the fact and said: “I know how Ivanishvili earned money and please do not make me speak up about everything.” Afterwards, we asked him to clarify his statement but he did not reply to us. If you really know anything about our business, please say it in public; otherwise please stop making obscure statements. I want to apologize to every opposition parties but I want to ask everybody: “What money do you live on and where do you get money to fund your parties if you get any? I am not asking about your generous friends – it is not argument for me! Your reply to these questions is extremely important for me and until I hear clear answer, I will not cooperate with any of you,” the open letter reads.

At the same time, Bidzina Ivanishvili names the political parties with whom he will never cooperate. He openly names them and says that he cannot cooperate with the Christian-Democrats, Labor Party, the New Rights, National-Democrat Party, Georgian Party and political parties of Tortladze and Davitaia.

Ivanishvili wrote that political activities of Giorgi Targamadze, leader of the Christian Democrat Movement, casts many doubts starting from his cooperation with Aslan Abashidze [former leader of the Adjara Autonomous Republic],continued with his betrayal of late Badri Patarkatsishvili and ended by creating, funding and introducing his political party into the parliament in exchange of his betrayal.

The businessman added that leaders of the above-listed political parties implement the orders of the government and they are: Shalva Natelashvili, Davit Gamkrelidze, Erosi Kitsmarishvili and Bachuki Kardava.

“Yes, I cannot cooperate with these people. Though I cannot exclude possibility to cooperate with certain members of those pseudo-oppositional parties, if they manage to revise their political past. I cannot avoid speaking about Sozar Subari, a person who did much good when he was Public Defender of Georgia and he very often criticized the impudent activities of the government. I really regret that Sozar Subari has occupied wrong place. If he wishes to join our political organization, I will appreciate it. I want to underline again, I refuse to cooperate with the above-listed political organizations but not with their certain representatives,” the open letter reads.

Bidzina Ivanishvili stated that he cannot cooperate with pseudo-oppositional parties, who have secret deals and connections with the government and act according to their instructions and orders.

He thinks those pseudo-oppositional parties hinder the democratic development of the country because in crucial moments they act as allies and partners of the government.

“In fact, Saakashvili’s government relays on those pseudo-oppositional parties – they create democratic background for Saakashvili’s regime before the entire world and create image of multi-party parliament by their participation in the Georgian single-party parliament. They destroy any initiatives of real opposition parties; they hush, neutralize and change the direction of general public protest,” the open letter reads.

Prepared according to the Interpresnews