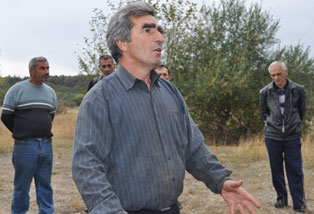 The population of Zemo Alvani village of Akhmeta region is protesting against the alienation of village pastures. Zemo Alvani is inhabited by Tushs. Majority of population pursues cattle-breeding. Tushs did not allow representatives of Ministry of Agriculture and Corporation of Agriculture to continue tilling of pasture and banished them from the village.

10 hectare of pastures has already been tilled in Zemo Alvani. The works are conducted by the Corporation of Agriculture of Georgia of Ministry of Agriculture. According to the representatives of the Corporation, they will have to plant walnut trees of French species in the territory of the pasture.

“We do not have vineyard. We do not have forest to produce parquet. Village of 5000 people is dependent on this 500 hectare pasture. Nobody was informed about this. We found out about it by accident. We need a document; whose is it, who purchased it? The pastures were not subject to lease agreement or privatization till now. What happened now, we don’t know,” – resident of village of Zemo Alvani Zaza Lagazidze stated to Kakheti Information Center.

“Cattle are our main source of income. We cannot live without it. If we are deprived of this territory, where can we move cattle? Don’t we have enough difficulties? They are tying our hands. We live by the cattle. We do not need their walnuts. People know what they want. We kicked them out and we will not let them come back,” – the village resident Lamara Tskiposhvili noted.

According to the majority deputy of Zemo Alvani Besik Kizilashvili, even this territory is not enough. “This territory belongs to state and the Ministry of Agriculture is implementing a project here. Different species of walnuts will be planted. The best one will be cultivated. I do not have any other information. This is a village of 5000 people and even including this territory the pastures are not enough.”

- If this is so, why are the pastures tilled, what can people do?

- I do not know what will happen. Nothing is unsolvable. We will do whatever is necessary for people.”

The residents of Zemo Alvani started collecting signatures on behalf of Kakheti Governor. They are requesting the returning of pastures.