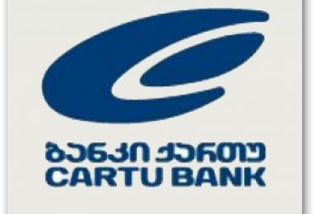 Cartu Bank stated that as a result of the unfair policy of the government, deposits of 45 million GEL were withdrawn from the bank. The Cartu Bank spread special statement regarding the issue.

“The Cartu Bank wishes recent events around them had legal basis. Unfortunately, illegal activities of the governmental officials have only political grounds. Detention of the relatives of Bidzina Ivanishvili, the Bank owner; terror against his construction entities and other properties of the JSC Cartu Group; attack on the cash-in-transit car and seizure of large funds of the bank for ungrounded accusation of money laundering; unprecedented oppression on the bank customers which finally resulted into flow of almost 45 million GEL from the bank –is part of those illegal activities that were conducted by the government. Everything started on October 7, 2011 after Bidzina Ivanishvili publicly announced his decision to come into the government of Georgia through the elections.

Political motivation of the governmental officials’ illegal activities was repeatedly proved by the statement of the Parliamentary Majority leader Petre Tsiskarishvili on November 8 at the parliament: “I wonder what will happen if a person (meaning Bidzina Ivanishvili) with Jewish background and surname, governed from Damascus or any other capital of Israeli’s enemy state, arrives in Israel and announces his desire to participate in the governance of the country. If he requests citizenship, right to transport money from banks by his cash-in-transit cars… who would have allowed him to make similar statements in Israel or in Tel-Aviv? Would he have chance to be a politician? Just imagine.”

The statement of the parliamentary majority leader clarifies that “cash-in-transit car of the Cartu Bank together with two million USD and one million Euros was arbitrarily attacked on political grounds and not in the name of their struggle against crime.”

We should also focus on the promptly adopted law about “Amendments to Several Legislative Acts of Georgia” by the Parliament of Georgia. Article 823 of the Georgian Law on Execution Procedures was already put in force since November 7 together with new amendments and new edition.

The recent amendment seriously attacks the Georgian bank system, degrades their and entirely Georgian state’s reputation before international community. In similar legislative environment a bank, as a first rank mortgager , cannot be an ensured creditor and if after registration of the mortgage it will be found out that basis for the mortgage existed before the registration, then the ensured requirement will be satisfied first and the bank’s requirement will be satisfied only afterwards that neglects presumption of correctness of the Public Registration Agency’s recordings and in fact neglects essence of the mortgage or other universally declared fundamental principles.

Banks will face more problems if a costumer makes a deal with the Revenue Service aiming to recover its property that was mortgaged at the bank after having paid minimum amount of the money.

It is difficult to predict the scale of voluntarism as a result of this amendment. Moreover, as a result of supposedly reasonable politics of the old management of the bank significant part of the large creditors of the Bank are under control of odious governmental officials and it is not excluded that we will see new jointly planned and well-camouflaged provocations.

It is obvious that in similar situation credit institutions get into unpredictable environment and sustainability of the bank system becomes very fragile and dependable on the “kind will” of tax agencies. It will definitely create serious problems for reliability of financial sources of depositors and other creditors of banks; in fact it will make implementation of the mortgage credit operations impossible.

Management of the JSC Cartu Bank is farther concerned about the issue, because two years ago similar legislative initiative was blocked with the joint effort of the bank sector of the country; however, today neither National Bank of Georgia nor Bank Association and commercial banks expressed minimal protest against the amendments. Thus, we doubt the legislative initiative was politically motivated and aimed to punish only Cartu Bank. Furthermore, the amendments clarify numerous illegal acts against Bidzina Ivanishvili and his property in Georgia.

We intend to increase our cooperation with International Financial Institutions. They have invested huge financial and intellectual resources in the establishment/development of civilized bank institutions in Georgia and in most cases they own significant shares in Georgian banks.

JSC Cartu Bank is deeply concerned about recent changes in the bank system including the current situation resulted from the legislative changes. Thus, the Cartu Bank suggests the Georgian National Bank, Bank Association, Georgia based commercial banks and international financial institutions to evaluate the reality created around our bank which will supposedly destroy entire Georgian bank system and to resist each politically motivated attempt to punish banks.”