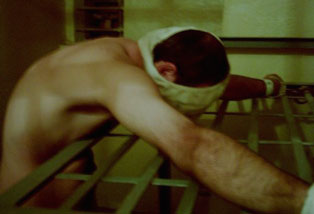 Ombudsman of Georgia sent an explanation note of the prisoner who explains how he was tortured by the employees of #18 Prison Department to the main Office of Prosecutor of Georgia.

The representatives of Public Defender met with the convict Kakhaber Baratashvili on December 1st of 2011. The lawyer of Kakhaber Baratashvili addressed Giorgi Tughushi with a request. He noted that his client told him about the verbal and physical insult from the side of the employees of administration.

The prisoner notes that for half an hour nobody saw him. Then he again addressed the supervisor with the same request. Again with no results.

“Due to unbearable pain, I was forced to knock on the door of the cell. Several employees of the department came in. They knocked me down and beat me. I continued to have unbearable pain later. I felt insulted too. Then I crept to the door and started to knock my head on it. The employees of #18 prison department came back, handcuffed me and took me to the morgue where they put me on the floor and beat me,” – the prisoner noted.

Kakhaber Baratashvili explains that after the abovementioned fact for about 30-40 minutes he was lying on the floor of the morgue. Then he was transferred to the cell #10 of the psychiatric department where his cellmates gave him clothes. The prisoner recalls that he still had unbearable pain. Then he was taken to the cabinet of the head of security department of #18 prison department where Avsajanishvili made him write with threats and verbal assaults that the damages were self-inflicted and he had no claims against the employees of #18 prison department.

“GYLA disseminated the statement on December 6th regarding the prisoner Kakha Baratashvili on the fact of physical and psychological pressure exercised against the prisoner in the prison and medical departments. GYLA was requesting to start the criminal case on the fact of inhuman treatment against Kakhaber Baratashvili and not to endanger his life and health. Several hours ago we found out that the prisoner went through the kidney surgery at night of November 30th in the same department. The verbal assault also took place against his family members,” – GYLA notes.

The Ministry of Corrections and Legal Assistance of Georgia does not comment on this issue.

The member of the faction Ertoba Samartlianobisatvis Dimitri Lortkipanidze reprimanded the Minister of Corrections and Legal Assistance of Georgia Khatuna Kalmakhelidze.

According to Lortkipanidze, the Minister did not say a word about the facts of torture in the Penitentiary Departments which is mentioned in the Ombudsman’s 2010 report and which he promised to discuss a year ago.

The head of Human Rights Committee of Parliament Lasha Tordia responded to Lortkipanidze that Kalmakhelidze was not invited to the Parliament to talk on this issue.