“Cheers – The Dragoon Will Fly Away!” 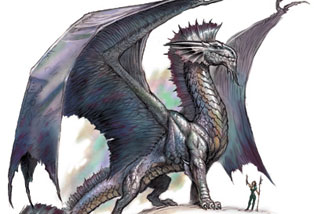 Old New Year [In Georgia according to the old calendar New Year is repeatedly celebrated on January 14th] put an end to endless New Year and Christmas parties. The feast-loving and hospitable Georgian people are getting back to their jobs. Politicians are waking up like a bears from hibernation and going outside. So, editors have much to do.

Eastern calendars celebrated by us with the New Dragoon Year. Dragoon is an eastern phenomenon and it is difficult to find out whether it is good or evil. In Georgian mythology we have a monster which is evil by all means. So, we Georgian people believe a dragoon is also a monster and when we dislike something we call it draconian (harsh).

The “National” majority of the Georgian Parliament welcomed us into the New Dragoon Year with draconian (harsh) laws. All those laws were passed on December 28-30, 2011, just before the New Year. It was difficult for opposition parties to start special briefings before the New Year and they spread only protest press-releases via news agencies.

If we follow the eastern calendar, in 2011 the parliamentary majority of the National Movement really acted like a frightened rabbit and passed new laws to combat a new figure in the Georgian politics, Bidzina Ivanishvili. In fact, they designed a valid legislative base to prevent billionaire Bidzina Ivanishvili from joining Georgian politics; furthermore, they interfered in his banking activitiesand personal life. Rabbit MPs did their best to create pre-conditions for Ivanishvili to lose the parliamentary elections in 2012. This demonstrated huge fear of the National Movement.

Besides Ivanishvili, in 2011 Misha’s (Saakashvili) parliament passed many new regulations which restrict human rights. Human rights organizations spread many statements regarding those amendments. You can read them on the archive of urgent appeals on www.humanrights.ge where you will find many critical evaluations of the new laws.

Dragoon is a chimerical animal – so it does not exist in real life. However, potentially, a dragoon might live in every person, who can spit fire (or slobber), burn, ruin, and subdue the country.

A Chinese proverb says: a fighter against a dragoon might finally turn into dragoon. This metaphor works in Georgian political reality too: Saakashvili, who was fighting against Shevardnadze, finally turned into Shevardnadze himself.

If we review statements of oppositionist Saakashvili during Shevardnadze’s presidency, you will hear many equal accusations. Shevardnadze could never dream such a maniacal and non-transparent state budget like we observe nowadays. Did Shevardnadze have an odious state attorney, Levan Mamaladze? Saakashvili has two odious employees already: Tsezar Chocheli and Davit Kezerashvili, who earned a fortune doing nothing! Shevardnadze had one “pocket TV-Company” while Saakashvili has a set of slave TV-Companies.

Shevardnadze also liked opening ceremonies but only on New Year or Tbilisoba holidays. I remember, I worked for the newspaper, “Resonance” by that time and headline of one of our leading articles was, “Shevardnadze – Great Opener”. Saakashvili might be called “Misha, the  Almighty Opener.” Georgian people have joked about this topic for a long time. It is good because we all know that a cruel king fears the public, ironically, most of all. Those who have not seen yet can see the Opening Ceremony of Toilet in Lagodekhi.

Recently, Misha has completely lost control. He is opening something every day. Because of this nonsense, 20-minute stories in the Public Broadcasting news program “Moambe” last half an hour. If it continues like this, the length of similar PR-stories will break records held by North Korean and Venezuelan TV-Channels.

Supposedly, Misha is competing with Ivanishvili. Little time is left before the elections and he has to win the hearts of the population. A short time ago, he opened a new hospital in Tkibuli where medical service costs two and three times more. I was curious as to what happened after the opening ceremony and asked the local people. They said there are only twenty beds in the new hospital and it is not enough for the minors’ town. The building of the old larger hospital was assigned to the Company “Barambo” (producing sweats which belongs to Tsezar Chocheli). Tkibuli residents told me, the sewing factory, which was opened three months ago, was closed without paying salaries to the workers.

In the beginning of the 1990s, in the epoch of darkness, cold and criminal raids, the father of Mkhedrioni, [paramilitary formation] Jaba Ioseliani, joked “If we survive this winter, we all should take a photo together.” He loved similar black jokes.

Nowadays, we live neither in darkness nor in cold. Tbilisi is illuminated more than ever. But… cleaning taxes attached to electricity bills and increased prices on food products robbed people. Simultaneously, Saakashvili initiated a new presidential project – “Smiley Georgia”.

I do not know what the dragoon is with him!

Maybe, he is also thinking about a photo, when we all will stand at the wall and he will tell us like an experienced photographer: “Cheers, The Dragoon Will Fly Away!”