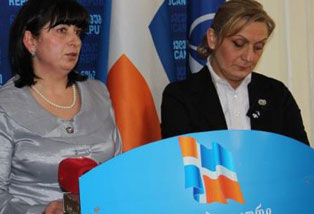 “Several days ago, school director Paata Chkheidze asked me to write petition on dismissal from school but I refused. He said he had already prepared a decree on my dismissal from school. It read, the director was acting in comply with the Article 43 Part II of the Law of Georgia on General Education and Article 38 of the Labor Code of Georgia. I asked him to clarify the real reason of my dismissal. He said it was instruction from higher institutions. The director added, although he appreciated my professionalism, unfortunately he could not protect me. By the way, on January 5, a session of the pedagogical council was held in the Kakabeti Public School, where the director thanked him for my qualified work,” said Tamar Sukhiashvili.

-What was real reason for your dismissal from job?

On December 24, I met head of the district education resource center. We had a sincere conversation. The head of the resource center told me she would think on my promotion because in 2004 I had passed two stages of school director’s certificate exams. I am an employee of the National Center of Examinations and check papers of students in History. I participated in two international conferences, and am member of the European Association of History Teachers. After all this, I do not know what happened. On January 6, they handed the order on my dismissal. On the same day I met the head of the resource center; I met the school director in the presence of the head of resource center, where the director alleged an anonymous letter was sent to the general inspection of the Education Ministry where the author wrote about my cooperation with Ivanishvili. I said it was absurd motivation for my dismissal because the law does not recognize anonymous letters.

-Did you try meeting with the senior local governmental officials?

-I requested meeting with the district governor Gia Chalatashvili. But he categorically refused to meet me until I asked him to receive me as an ordinary citizen and not as a teacher.

-Why did he refuse?

-He told me he did not want meeting with sacked teacher. Later the governor agreed to meet me only in the presence of his three deputies. I agreed and we conversed. He said they could not find any person who disrespected my professionalism but asked me to name the real argument of my dismissal. I said I knew no arguments. Then the government told me I was a member of Ivanishvili’s ten-member committee and I had signed some documents. It was completely absurd accusation against me. Then he told me second argument: I meet and talk with Bidzina Ivanishvili and said it was easy for him to listen to phone-conversations of citizens. His third accusation was – distribution of Ivanishvili’s proclamations in the district… I have right to have my personal political opinion.”

Sagarejo district governor Gia Chalatashvili confirmed his meeting with Tamar Sukhiashvili but denied accusations against him. “She asked meeting with me. We met, she explained her problem. I promised to attend to the case and find out everything though her dismissal from school was beyond my competence. Her accusations against me are completely groundless,” said the governor.

We got in touch with the director of the Kakabeti public school Paata Chkheidze. As soon as he learned the purpose of our phone call, he cut off the line. Afterwards he did not answer our phone calls.

A leader of the Georgian Republic Party Tina Khidasheli said the government tries to obtain the public support by their ordinary methods, intimidation, blackmail, firing and seding police officers to families.

“Unfortunately, Mikheil Saakashvili could not learn good lessons and he intends to intimidate people with old methods because he is afraid of inevitable defeat. Last week we spread information about dismissal of several teachers. Apparently, the Minister of Education Shashkin tries to demonstrate his devotion to the authority. By now, a lot of people have already been sacked from jobs in various regions of Georgia; part of them has already filed resignation applications, others received verbal warning about dismissal. Part of those people, luckily, refuses to personally write resignation applications and request explanation from the administration. Thus, they will have chance to protect their rights at the Court. I would like to tell all those people, who work in public sector and receive salaries from state budget, we will ensure protection of their rights. All cases will be lodged to the court and everybody will receive compensations for the problems they have faced by current authority,” Tina Khidasheli said.