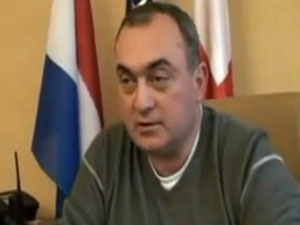 Nikoloz Rekhviashvili has been taking compulsory treatment at the Kutiri Psychiatric Hospital for two years already. He was arrested for the attempt of premeditated murder, but since he had mental problems, the court sent him to compulsory medical treatment.

In accordance to the Article 18 Paragraph 9 of the Law of Georgia about Psychiatric Care, the patient takes treatment at hospital until criteria of psychiatric care expires; this term shall not exceed 6 months. The law does not contain provisions about permanent treatment. In Nikoloz Rekhviashvili’s case, the treatment has exceeded 6 months long ago; he has been in psychiatric hospital for two years and his treatment term was prolonged three times.

On October 17, 2011 head of Human Rights Center’s Legal Aid Center Nino Andriashvili sent letter to Gocha Bakuradze, director of the Kutiri Psychiatric Hospital, who soon replied to her. He wrote that patient Nikoloz Rekhviashvili has chronic psychiatric disease – paranoid schizophrenia and he receives neuroleptic drugs and correctors in the frame of medical treatment. “Due to Nikoloz Rekhviashvili’s psychic conditions, based on the decision of the commission of psychiatrists, he must take compulsory psychiatric care at hospital.”

Lawyer Nino Andriashvili thinks doctor-psychiatrists decided to keep the patient in the hospital for a prolonged term. In private talks the doctors noted that they cannot take responsibility to promise that the patient will not commit a crime in future after leaving the hospital. At the same time, they have never dismissed similar patient within 6 months term before. Nikoloz Rekhviashvili committed the crime envisaged under the criminal code, which is punished by 9-year-imprisonment. There is a stereotypic practice in the psychiatric hospital that patients, who have committed grave crime, must spend the imposed imprisonment term in the hospital.

Thus, Nikoloz Rekhviashvili will have to spend several more years in psychiatric hospital though he is taking medical treatment there instead serving his punishment term.

After every sixth months, the commission must gather and evaluate the psychiatric conditions of the patient and conclude whether he has recovered or not.

Nikoloz Rekhviashvili has been declared disabled since 1985. The Court appointed legal guardian Davit Mekoshkishvili for him, who pays attention to him and keeps him.

Nino Andriashvili said, Nikoloz Rekhviashvili committed crime in the affect conditions. Nowadays, he is calm and has proper mentality – he personally drafted the suit for the court and litigated against the commission conclusions. However, the hospital administration does not allow him to send letters that is farther violation of the law.

The patient often calls the Human Rights Center and urges for help. According to the Center’s petition, the representatives of the Public Defender’s Office visited the Kutiri Psychiatric Hospital and studied the situation on the place. Despite the requests of the guardian, relatives and the patient, Rekhviashvili is not allowed to have correspondence that could assist him at least to appeal to the Court. This person cannot even send ordinary letters to his relatives. In fact, he is not taking treatment; he is prison.

The relatives are afraid that the environment and the sedatives, which he permanently receives, might worsen his conditions instead recovery.

Nino Andriashvili said the patient has been taking compulsory treatment at the Kutiri Psychiatrict Hospital for two years that is much longer period than the estimated 6 months. So, his rights are breached. This person needs assistance but neither his relatives nor others can help him. The guardian and relatives request his release. However, the hospital administration does not respond to their petitions at all.

Humanrights.ge got in touch with the director of Kutiri psychiatrict hospital Gocha Bakuradze but he refused to comment on the issue now and promised to answer all our questions in a week. Consequently, we will publish his comments on the issue later.