“Logic Does Not Have Gender!” “Protest Demonstration vs “Female Logic” 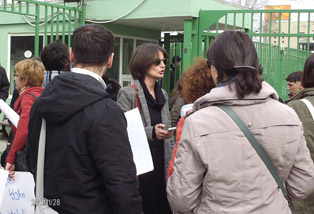 On March 26, a protest assembly was held in front of the TV-Company Imedi. The participants requested the company administration either to close or to change the format of the TV Program “Female Logic” in order to meet ethic norms. Several dozen people participated in the assembly, mostly representatives of NGOs.

The protesters filed a complaint to the TV-Company “Imedi” where they had provided arguments why the program breached professional standards and why it propagandizes sexism. Civil society had signed the complaint on social networks on the previous day. By March 26, over 950 signatures were collected. The initiators of the protest rally said it was first occasion when more than 900 people signed the petition during 4 days.

“We protest the TV-Program for various reasons. First of all, it contradicts the Georgian Ethic Code of Broadcaster. Additionally, it insults women, breaches their rights and discriminates them. Female Logic reinforces the stereotype that a woman, particularly beautifully hair-dressed and made-up, is necessarily stupid. We demand to close this program or to change its format and content,” one of the organizers of the assembly Ninia Kakabadze told the Human Rights Center.

Chair of the Georgian Young Lawyers’ Association Tamar Chugoshvili also participated in the rally. She spoke about logic norms which the TV-Company Imedi breaches by releasing Female Logic. Namely, the program contradicts Article 3 Part 1 – “b” of the Ethic Code which regulates the activities of the broadcaster.

Lawyer of the TV-Company “Imedi” said in his interview with the Maestro that self-regulation body of the TV-Company will process the complaint. “If they conclude that women’s rights are breached, we will necessarily discuss the topic with program producers how to modernize the program in order not to make the issue painful for the society.”

“Female Logic” was first aired on March 4, 2012. The program promo states that it is Dutch Project where men try to correctly guess the possible answers of the women on various questions.