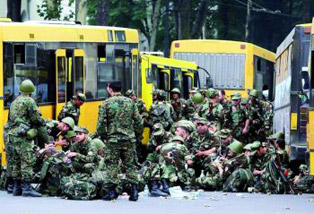 Lately, opposition representatives have spoken about the training of paramilitary groups in western Georgia, particularly in the Samegrelo region. They have noted that the government is training a special contingent to be used to disperse possible protest demonstrations. The government responded to the opposition’s allegations after March 15, when Irakli Alasania, leader of opposition political party Our Georgia – Free Democrats, asked foreign ambassadors accredited to Georgia to put pressure on the Georgian government to halt the training process of armed units in Samegrelo.

Alasania, addressing the diplomats in English on March 15, appealed that: “before it is not too late and before we have another Homs in Zugdidi or some other place, I am begging you, please, start reacting; we can still change these dramatic events, which we will face if this goes on before October…we are approaching critical edge and your involvement is urgently important.”

The entire world is focused on the ongoing bloody conflict in Homs and other cities of Syria. Georgian government officials were astonished by the parallels drawn between Zugdidi [capital of the Samegrelo region] and Homs, and predictions of civil conflict in Georgia. The parliamentary majority called Irakli Alasania a provocateur and blamed the opposition for working with Russia to create turmoil in the country.

President Mikheil Saakashvili also responded to Alasania’s statement two days later, calling it idiocy. His emotional comment traditionally insulted his political opponents. “I just want to remind everyone that now it is 2012 and not 1992” when Georgia was engulfed in internal armed confrontation. “Even raids of [a notorious paramilitary group in early 1990s] Mkhedrioni did not force the population of Samegrelo to give idea of the Georgian statehood… So threats of any kind in address of these people is just a huge immorality; to put it bluntly, that’s idiocy, but it echoes very well the plans of one country and I want to tell everyone: talk whatever you want, but wash your mouth out before mentioning Samegrelo and the Georgian people in general and give up playing with such issues even in your fantasies, but if you have it on your mind, keep it for yourselves.”

The parallel with paramilitary group Mkhedrioni takes us back to 1990s when they actively participated in the military overthrow of the late President Zviad Gamsakhurdia in 1991; in the dispersal of protest rally of Gamsakhurdia’s supporters and the war in Abkhazia in 1992-93. This civil controversy ended in huge casualty. The activities of the Mkhedrioni were prohibited since 1995. However, some paramilitary groups still created threat for the stability of the country in various regions of the country. Similar groups acted in Gali district (Forest Brothers with Davit Shengelia as commander), in Svaneti (semi-paramilitary group “Monadire” subordinated to the president’s attorney Emzar Kvitsiani) and in Pankisi Gorge (paramilitary groups with unidentified origin which Russia associated with Chechen boeviks). Eventually, all those groups stopped functioning.

“I want to emphasize your attention on what’s happening in western Georgia; why the paramilitary groups are formed? Who’s arming them?” Alasania said. “This precisely leads to believe that Saakashvili is not preparing grounds for fair and free election; he’s preparing grounds to have official execution of political opposition. Sakashvili’s recent rhetoric shows that he is preparing for civil war and controversy.”

On March 20, Irakli Alasania gave a special press-conference on the issue and emphasized some more issues. He said that the Akhalaia’s Clan have created illegal paramilitary groups in Samegrelo after instructions from Saakashvili. Roland Akhalaia is the chief prosecutor in Samegrelo region; his two sons, Bacho Akhalaia and Data Akhalaia, are the Minister of Defense, and a former head of the Department of Constitutional Security at the Interior Ministry respectively.

“The Akhalaias gave concrete instructions to people who represent various law enforcement institutions. They control, armament and fund armed formations. About 500 people received weapons and they are divided in groups of 50-75 members and receive “illegal money in cash.” Those people are former warriors; people with criminal record, part of them joined the formations due to financial motives. They are not registered in any of law enforcement agencies,” Alasania said and added that he refrains from making other details public and intend to forward all the information to the National Security Council for further processing.

The Defense Minister said people “voluntarily join the reserve service, that they would follow their patriotic spirit and not receive salaries for it. He added that “we decided to establish voluntary reserve units close to the conflict zone and administrative borders because our and general public interests are higher there than in other places… If anybody wants to detect stupid purposes in our activities, I cannot ban him/her to do it. Let them rave as much as he wishes.”

Thus, the Defense Minister confirmed the information about paramilitary groups in Samegrelo region though introduced them as the “voluntary reserve.” On March 23, the Georgian National Security Council (NSC) took a similar position when they published documents provided by Irakli Alasania  on their website and noted that this information does not contain any threats to the state's interests.

According to the Civil Georgia,, the file published by the NSC on its website include Alasania’s letter to NSC and attached list of names of those, which Alasania claims, are in charge of armed militia groups, as well as several locations in Zugdidi and several villages in Samegrelo region, where these groups are allegedly stationed; for instance in one case Alasania’s letter states that there is a 350-stong group based in “private houses in Zugdidi” and which is led by Koba Akhvlediani, a former chief of security guard of Roland Akhalaia”; the latter is chief prosecutor of Samegrelo region and a father of Defense Minister Bacho Akhalaia.

“It simply lists first and last names of military and police personnel, including those of Minister of Internal Affairs [Vano Merabishvili] and Minister of Defense [Bacho Akhalaia], as well as heads of regional police units and of high-ranking officers from ministries of defense and internal affairs,” NSC said.

NSC Secretary Giga Bokeria said: “It is completely strange to allege that our state police and armed forces are informal, illegal units. Moreover, it is astonishing and irresponsible to predict civil war or a tragedy like Homs, Syria in Georgia.”

What is Voluntary Reserve?

Civil society fears that Irakli Alasania had enough grounds to be concerned. It is established that armed people whom the Defense Minister introduced as “voluntary reservists” and NSC Secretary as “police and armed forces of our country” really exist in the Samegrelo region.

What, then, is this voluntary reserve service and how safe are the trainings for reservists in Samegrelo region? Journalist of the Human Rights Center’s video portal HRIDC.TV tried to get answers to these questions. According to the video-story, the amendments to the Law about Military Reserve Service allow citizens to voluntarily join the reserve army; however, this fact has raised concern among experts and human rights defenders.

Those people are: women; technical personnel of the railway department; workers and other personnel of transit/shipment services and people who repair locomotives and railway transport; marine personnel; teachers and doctors working in the villages; officers of the MIA and Defense Ministry; personnel of the Tbilisi Metro Department; judges; people who have served non-military alternative labor service; people working or studying abroad; diplomatic officials; clergymen; people discharged from the military service due to health problems; and members of the Georgian Parliament.

Teona Akubardia from the NGO Civil Council of Defense and Security stated that civil society is concerned about the new authorities given to the Defense Ministry. Particularly, during the public protests in November of 2007, the head of the General HQ of the Ministry of Defense appeared on Rustaveli Avenue and there was a risk that the government would use military force to disperse demonstrators. Akubardia added that the new authority given to the Defense Ministry to recruit reservists could increase this risk.

The Executive Director of Human Rights Center, Ucha Nanuashvili, paid particular attention to the part of the new provision in the law which widened the circle of citizens who can be recruited to the reserve service. Among them are employees of the Defense and Interior Ministries, judges and people convicted for gross crimes.

“It is completely unclear to me why those people should take military service. Officers of the Ministry of Interior and Ministry of Defense, as well as judges have their own functions and obligations; so it is unclear why they should join the voluntary military service,” Ucha Nanuashvili noted.

Military expert, and member of the Coalition Georgian Dream, Irakli Sesiashvili said the current reserve system in Georgia is completely ineffective, something that was well demonstrated during the armed conflict in August of 2008. Sesiashvili stated that the new five-day voluntary service cannot improve the situation at all and added: “In parallel to it, according to the information that has been disseminated, people with a not so pleasant background are directly offered to join the voluntary reserve service in the regions of Georgia. If it does not have any political purposes, the government will soon acknowledge that the establishment of any similar voluntary reserve service is waste of resources, energy and time.”

Experts hope that the voluntary reserve trained in Samegrelo region will not play the role of a wolf in sheep's clothing. A government that passes extraordinary laws just before elections, however, does not inspire beliefs to the contrary.