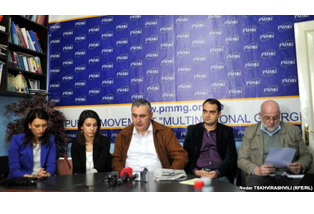 Several days ago, Murman Dumbadze from the Georgian Dream stated that Giorgi Masalkini from the Republic Party is not ethnic Georgian and is not bothered about intended construction of Aziziye mosque in Batumi. The NGOs request Dumbadze to publicly apologize for his statement.

“Lately, representatives of various political parties made statements containing signs of xenophobia, religious and ethnic intolerance through various media sources (TV-Channel 25, newspaper Kronika, etc). The authors of those statements supposedly tried to use ethnic and religious belonging as main tool to gain votes during the elections. Every politician must be aware that it is impossible to achieve success in Georgia by xenophobia, and by degrading religious or national feelings of any person. Nobody shall be allowed to steer up controversy on ethnic or religious grounds and undermine Georgian statehood,” the NGO statement reads.

“Although Georgian law does not envisage punishment for hate speech, I think it shall not be encouraged. We call upon everybody to refrain from similar statements. It will hinder development of normal process in the country,” chair of the Georgian Young Lawyers Association Tamar Chugoshvili said.

Media-expert Zviad Koridze from the Coalition for Freedom of Choice suggested the media-organizations to be careful with xenophobic statements.

“Unfortunately, there are politicians in Georgia who try to manipulate with similar sensitive topics. They believe similar statements will assist them to gain more voters. I want to ask all my colleague journalists to discourage similar xenophobic statements and not to participate in the games of certain politicians,” Zviad Koridze said.

“The Multinational Georgia is sending yellow card to Murman Dumbadze and gives time to publicly apologize within one day after he receives our card. Unless he apologizes, we will send him red card and you all know what it means,” Arnold Stepanyan said.

Dumbadze has not apologized yet but Coalition Georgian Dream spread official statement where they apologized for xenophobic statement of their member Murman Dumbadze. Several days ago, Dumbadze personally told the newspaper Resonance that he is not going to apologize.

Giorgi Masalkin also responded to Murman Dumbadze’s statement: “We must be more provident and diplomatic. Nobody must make negative evaluations about different religious or ethnic origins. We have neighbor countries with diverse confessions and we need their support. So, xenophobic statements will never do good job for us. Nobody has apologized to me and my family. Let Dumbadze apologize to me in the same TV-program “Objective” where he insulted me. But he will not do it,” Masalkin told the tspress.ge.

Public Defender of Georgia also criticized Dumbadze’s statement. “I consider that such a statement deserves an extremely negative assessment from me, as a defender of rights, since I consider it inadmissible to point to ethnic origin as a problem of any sort. It is especially politicians who should refrain from making such statements, since similar statements can contribute to fomenting intolerance in society, which poses a danger to civil unity and insults not only concrete persons, but also the dignity of citizens of Georgia in general, contradicts the values and aims whose establishment constitutses a firm will of the citizens of Georgia and which are declared in the preamble of the Constitution of Georgia,” the statement of the Public Defender reads.

Nongovernmental organizations call upon everybody to be careful with the minority issues and refrain from xenophobic statements. According to their statement, the civil society will respond to xenophobic statements containing hate speech elements by any politician or public figure in future too.