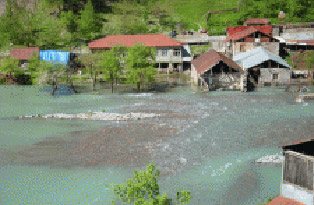 Natural disasters are a common problem in Georgia. Floods, landslides, storms, hurricanes and other natural disasters often destroy houses and residential areas for people. According to Georgian legislation, people uprooted by natural disasters, so called eco-migrants, do not have IDP status and are not entitled to the social benefits of internally displaced people (IDPs). One of the main shortcomings in dealing with natural disasters is the lack of risk assessments which leads to damages that end up costing the state millions of lari.  Most often, the government chooses to deal with the results of natural disasters instead of investing in preventive measures.

Spring is a particularly problematic season when snow starts melting in the mountains, flooding rivers. Together with the heavy rains that start in the spring, this leads to natural disasters like landslides, torrents, and flooding which affects thousands of people. In the spring of 2012, , five people, among them two underage children, died as a result of a flood. In several regions of Georgia, landslides and floods, roads, bridges, and other infrastructure were damaged and several villages were cut off from the outside world. Civil society groups criticized President Mikheil Saakashvili for having attended the European Championship semi-final in football for players under 17 in Bratislava soon after the flood in the capital. The president then went on to visit Milan and photos of him visiting luxurious shops were spread on the Internet.

According to local NGOs the Georgian state avoids its responsibilities toward eco-migrants. The victims of natural disasters have been living in risk zones for many years. After being displaced due to natural disasters or risk thereof, the eco-migrants often have a hard time adapting to their new living environment and choose to migrate back home, continuing their lives despite the apparent risks.

According to official statistics, between 1987 and 2010 about 400 people died as a result of natural disasters in Georgia. The economic damage amounted to about 150 million USD per year. In 2006, specialists detected 53,000 potential landslide sites in a total space of 1,500,000 hectares. There are about 3,000 settlements housing a total of 400,000 families in the risk zone.

The funds allocated from the state budget for preventive measures are 40 times less than the damages resulting from natural disasters. Experts believe that this approach is the root of the problem. Rezo Getiashvili, Project Coordinator at the Caucasian Environmental NGO Network (CENN), said that the state should pay more attention to risk management, which means preventive measures – activities carried out before a disaster.

First of all, these preventive measures should include specialists thoroughly evaluating the danger, vulnerability, and risks in certain areas and continuously monitoring these areas for up to date prognoses. Attention should be paid to the planning of plot cultivation and the drafting of adequate construction codes because, in many cases, natural disasters are caused by heavy development. In addition, the state budget should allocate funds for preventive measures (cleaning of river-beds, construction of jetties, etc), as well as for ecological education and trainings for the population. The state should be equipped to handle expected and unexpected disasters, investing in adequate warning and communication systems, as well as drafting special action plans and evacuation plans for emergency situations. Shelters and reserves of humanitarian aid must be arranged in advance. Rescue teams should be trained on a regular basis.

The state should have a detailed action plan for measures to be implemented following a disaster. This should include: humanitarian aid, cleaning, timely repair of services, evaluation of damage and identification of restoration priorities, mobilization of reconstruction resources, rehabilitation, macro-economic and budget management, restoration of damaged area, involvement of risk management in the reconstruction process and, most importantly, resettlement of eco-migrants.

According to United Nations guidelines, national governments have the ultimate responsibility to provide internally displaced people with relevant protection and humanitarian aid. With global warming, the number of natural disasters increases causing migration flows of victimized people both inside and out of affected countries. Various states envisage this reality in their domestic laws and take on certain responsibilities vis-à-vis the victims.

According to the law in Azerbaijan, Georgia’s neighbor state, eco-migrants fall within the category of internally displaced people. Legislation in Sierra Leone, Uganda, and Sudan also include eco-migrants in the definition of IDPs. However, Georgian legislation grants IDP status only to victims of armed conflicts. Representatives of the families who have been resettled from one region to another in Georgia as a result of natural disasters are thus left without even those meager social allowances that are envisaged for IDPs.

The activities of nongovernmental actors are vital for improving the current situation. In 2011, with the initiative of the Institute of War and Peace Reporting (IWPR) and CENN, the Civic Coalition for Migration Issues was created in Tbilisi, counting among its members Human Rights House Tbilisi (HRHT) and HRHT member organizations Article 42 of Constitution, and Human Rights Center as well as other NGOs.

“Citizens victimized by natural disaster are passive in Georgia and do not fight for their rights as actively as the victims of conflicts. The state neglects this problem and does not take adequate measures to satisfy the needs of eco-migrants. Every year the government tries to avoid dealing with the eco-migrants’ problems. We acknowledge that the state has tens of thousands of IDPs from the armed conflicts but that does not relieve them of the responsibility to assist other citizens too and solve their problems,” Giorgi Kupatadze, IWPR editor said.

The association “Borjgalo” has been studying eco-migrant issues in Georgia for several years. “Borjgalo” representative Ilia Guchmanidze says that it is necessary for the state to deal with the legislative vacuum that leaves it unable to adequately assist victims of natural disasters. When categorizing families victimized by natural disasters, the state pays attention to the level of damage on the house instead of looking at the existing risk in the area, an approach that Guchmanidze calls unjust. “We have recorded cases when a house is located on the edge of a gap in a landslide prone zone, but since it does not even have a crack on it the family was placed in a lower category without the chance of resettlement. The state only takes responsibility for resettling families from the first and second categories,” Ilia Guchmanidze said.

Guchmanidze added that the problems with natural disaster victims and eco-migrants could have been resolved much easier if local self-governments had had more authority. Nowadays, all details must be agreed with central authorities, in the ministries. The ministries cannot respond in a timely manner because the processing of all the information received requires substantial human resources. Thus, victims of natural disasters are often not effectively assisted.

The case of Zemo Mleta village is a good example of ineffective centralized style of management. NGOs and journalists have been reporting on the hardship of this small village in Mtskheta-Mtianeti region  for several years already, where several families face real danger every spring. On June 15, Human Rights House Tbilisi organized a  study visit to Zemo Mleta village for journalists to evaluate the local problems and to report about them in their respective media outlets. They found out that the situation had not changed for the better but that the government had promised the Mleta residents to resettle them in a safe place before the upcoming elections in the fall of 2012. Ioseb Zakaidze, representative of the local authority, said that by the end of the year the state will allocate seven thousand lari to each family in Mleta village: “The money is already allocated but we must first resolve the problem of plots. The population decided not to distribute the money before the territory of the new settlement, which currently belongs to Kazbegi district, is handed over to the Dusheti district administration.”

Resolving the problems faced by victims of natural disasters and eco-migrants could have been easier if society had more information about their rights. However, Georgian media covers environmental problems poorly, something that was proved by Human Rights Center’s Report on Media Monitoring. One of the purposes of the workshop and fieldtrip to Mleta village, organized by HRHT on June 14-15, was to build capacity among journalists interested in environmental and eco-migrant issues.