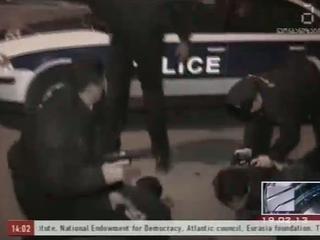 TV-Companies Rustavi 2, Maestro, Public Broadcaster and Imedi-TV have aired footage from the special operation of 24 November 2004 when Amiran (Buta) Robakidze was killed and people accompanying him were arrested.

Former Chief of Didube-Chugureti Regional Police Department Irakli Pirtskhalava, accused in the accident, sent the footage to all broadcasters, although it was first aired by Rustavi 2.

Before the video-materials were aired in the 12pm news program presenter Paata Iakobashvili apologized to viewers and Amiran (Buta) Robakidze’s family for horror scenes.

Rustavi 2 released the video-footage as top story and hid only Buta Robakidze’s face.  Journalist Natia Trapaidze said in 12 p.m. Kurieri that the footage shows “how they take one Kalashnikov machinegun and another machinegun from the car.”  According to the journalist “this footage was recorded several minutes after the car was stopped.  It was recorded nonstop; the camera was not turned off.”  Rustavi 2 did not air the complete footage whose original length is 10 minutes.

As soon as Rustavi 2 released the footage, it was uploaded on the website Palitra TV and circulated in social networks.

In 12 p.m. Moambe newscast of the GPB, , journalist Levan Kvatashidze read almost the same text as Rustavi 2 though underlined he was quoting Irakli Pirtskhalava.

“According to Pirtskhalava, the given footage demonstrates that Buta Robakidze and others were armed,” Kvatashidze says.  GPB covered faces of all actors in the video-material.

Maestro aired the footage at 1 p.m. with Rustavi 2’s logo.  Journalist did not make any comments on it.

9th Channel informed viewers about the video-material in its 2 p.m. newscast.  The TV-Company did not air the footage itself.  The footage was just described by the newscast presenter.  According to him, “the footage shows how wounded Buta Robakidze lies on the ground and how the cameraman records firearms inside the car.”

In the circulated video-footage one can only hear a gunshot and then we see wounded Buta Robakidze.  In 2004, after the special operation TV-program Patruli (Rustavi 2) spread information that Buta Robakidze was shot dead in double shooting.