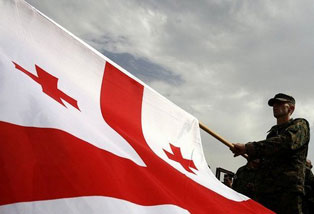 10 out of total 27 Georgian troops, who have sustained injuries in the May 13 attack by insurgents in Shir Ghazay, Helmand province in Afghanistan, were back on duty on May 14, the Georgian Ministry of Defense said.

Injuries of 17 Georgian soldiers are not life-threatening, according to MoD.

Three Georgian troops were killed in the May 13 attack when a suicide bomber rammed an explosives-laden truck into their base, accompanied with an attack by a group of insurgents, according to the Georgian MoD.

Defense Minister, Irakli Alasania, told journalists on May 14 that the Georgian troops were in full control of the area of their responsibility after yesterday’s attack, which was described as “the largest” one on the Georgian troops since their deployment in Helmand province in April, 2010.

NATO-led International Security Assistance Force (ISAF) said that the three servicemen were killed on May 13 when insurgents attacked their position with a vehicle-borne improvised explosive device.

Reuters reported, quoting a senior Western military official in Kabul, that two Georgian servicemen “died on the spot, a third died of wounds.”

Corporal Alexander Kvitsinadze; junior sergeant Zviad Davitadze and corporal Vladimer Shanava, who were killed in the May 13 attack, were from the 42nd battalion of the fourth infantry brigade, which was sent to Afghanistan less than two months ago. This is the first tour of duty to NATO-led forces in Afghanistan for this battalion.

For the Georgian troops the May 13 attack brought the largest casualty toll for any single incident since February, when three servicemen were killed in combat.

The highest number of Georgian fatalities in a single incident was in October, 2010 mine blast killed four servicemen.

Georgia has over 1,560 soldiers in Afghanistan making the country the largest non-NATO troop contributor to the ISAF mission.

Georgia’s first contribution to the Afghan operation came in 2004 when 50 soldiers were briefly deployed in the country under the German command as part of ensuring security during the presidential elections.
In November, 2009 Georgia deployed 173 soldiers in Kabul under the French command and in following year Georgia increased presence in Afghanistan by sending an infantry battalion in the Helmand province serving along with the U.S. marines and Georgia sent one more battalion to the Helmand province in autumn, 2012.

Georgia has offered  NATO to provide training to Afghan troops both in Georgia and on the ground in Afghanistan after 2014, when the NATO combat mission is due to end.

“The Georgian Armed Forces and the people of Georgia are making vital contributions to realizing our shared objectives under NATO's International Security Assistance Force in Afghanistan,” the U.S. embassy in Tbilisi said on May 14 while extending condolences over death of three Georgian soldiers. “We recognize that Georgia is one of the leading contributors to critical international security efforts.  The United States deeply appreciates and respects Georgia's contributions, and the sacrifices that come with them.”