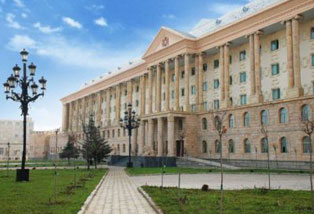 Prosecutor made introductory speech at the trial on Megis Kardava and 12 more accused people in the same case. Most resonance episode in the case refers to the torture of a military officer (Human Rights Center refrains from naming the torture victim due to ethic principles).

Prosecutor said that on September 17, 2011 officer of Military Intelligence and Air Forces was arrested for espionage and placed in Gldani Prison # 8. According to the prosecutor, Kardava ordered Aleksandre Mukhadze, Viktor Kacheishvili and Sergo Bitsadze to torture the officer to obtain his confession statement.

“The aforementioned people ordered two inmates representing sexual minority to torture the former senior military officer. After a ruthless beating and torture the prisoners had wrong sexual intercourse with the unconscious former military servant. During the torture the detainee felt bad, he was taken to hospital but died of severe cardiac insufficiency without reviving. The prosecutor claims the aforementioned prisoners systematically implemented similar orders of the prison administration; they have already confessed the crime and will be questioned during substantial discussion of the case,” the prosecutor said.

Kardava’s lawyer Malkhaz Velijanashvili said the prosecutor does not hold enough evidence to prove the grave accusation and it will be demonstrated during substantial discussion of the case.

“Those two inmates, who confessed torture of former military servant, might have pleaded guilty to get plea-agreement and escape the punishment easily,” Velijanashvili said.