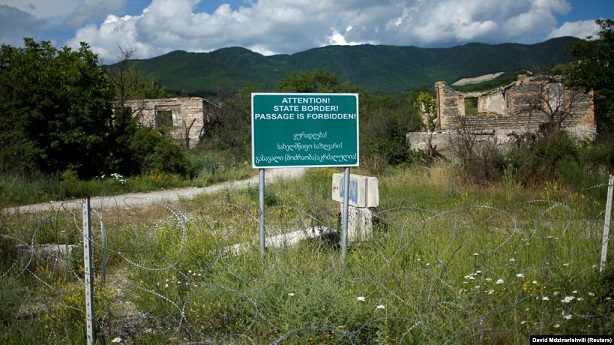 Georgian Coalition for International Criminal Court (GCICC) responds to the cases of illegal detention and prosecution of citizens of Georgia, Zaza Gakheladze and Khvicha Mghebrishvili by the Russian Federation which constitute grave violations of the fundamental human rights.

According to the information disseminated in the media, on July 11, 2020, 33-year-old Zaza Gakheladze, who lives in Kaspi Municipality in the village Kvemo Chala, went to the Skhvilo Fortress area located near the village to pick mushrooms with a friend from Samtavisi, Koba Paresashvili. According to the information of his family members, Zaza was far from the so-called administrative boundary line when the group of the border guards of the Russian Federation fired and wounded him in the leg. Zaza’s friend was far from him when he was wounded. According to Paresashvili, he heard the sound of only one shot. He managed to escape. As for Zaza Gakheladze, he was detained by the Russian border guards and was transferred to Akhalgori hospital. Later he was moved to the quarantine zone of Tskhinvali Hospital. According to the information disseminated in the media, the health state of Zaza Gakheladze is satisfactory.

Later, the Ministry of the Foreign Affairs of the Russian Federation and South Ossetian de facto government disseminated statements regarding the illegal detention of Zaza Gakheladze. According to their information, Gakheladze, who was armed with a semi-automatic weapon, crossed the so-called border and fired at the Russian border guards. The military servicemen of the Russian Federation fired as a response, according to the disseminated information. As a result, Gakheladze was wounded in the leg. The criminal case was opened by the de facto organs of the South Ossetia in relation to the articles of illegal detention and deprivation of life of the so-called military serviceman.

Except for Zaza Gakheladze, in July, specifically, on July 3, 2020, the representatives of the de facto government of South Ossetia detained another citizen of Georgia, 47-year-old Khvicha Mghebrishvili in the territory of the village Adzvi.

According to the information of the family members, despite the severity of the charges imposed against Gakheladze and Mghebrishvili, they do not have lawyers who would represent their interests in front of the de facto organs and would provide legal assistance for them.

The facts of restriction of free movement, as well as illegal and arbitrary detentions of citizens of Georgia by the representatives of the Russian Federation and de facto government have been ongoing for years along the occupation line, both along South Ossetia, as well as Abkhazia. Every year, hundreds of citizens of Georgia become the victims of these crimes, including, women and children. Throughout 2011-2019, 2818 individuals became the victims of the illegal detention/kidnapping along the administrative boundary line of Tskhinvali Region/South Ossetia.

The illegal detention of the citizens of Georgia, as usual, takes place under administrative rules. After paying relevant fine, the detained individuals are released. However, in recent years, the instances of detentions under the criminal law, have increased. In such instances, imposition of charges against the detained citizens of Georgia and conviction take place according to the Criminal Code of Russia, without ensuring right to fair trial and due process guarantees. As a result, the detained individuals stay imprisoned for years. The representatives of the de facto government detained the resident of the village Khurvaleti, Maia Otinashvili, on September 29, 2019, for the so-called illegal crossing of border, under criminal law. On November 9, 2019, the doctor Vazha Gaprindashvili was detained. On November 21, 2019, the resident of the village Zardiaantkari in Gori Municipality, Genadi Bestaev was detained. Unfortunately, Genadi Bestaev, against who the Tskhinvali de facto court passed two-year imprisonment sentence, still serves the sentence in Tskhinvali prison.

In parallel with the flawed practice of the illegal detentions at the so-called administrative border, we come across instances of grave human rights violations, such as violation of right to life and bodily injury. Specifically, in 2011, the so-called South Ossetian guards inflicted bodily injuries on two residents in the village Chalovani in Sachkhere as a result of shooting. Besides, for last several years, the occupation regime of Russia ended lives of four citizens of Georgia – David Basharui, Giga Otkhozoria, Archil Tatunashvili and Irakli Kvaratskhelia.

The cases of the detention and prosecution of Zaza Gakheladze and Khvicha Mghebrishvili along with other incidents clearly demonstrate the facts of systematic violations of fundamental human rights by the Russian Federation and de facto organs of Abkhazia and South Ossetia/Tskhinvali region. The Russian Federation, as a state exercising effective control over the territories of Tskhinvali region/South Ossetia and Abkhazia, bears responsibility over ongoing grave human rights situation. The situation on the occupied territories as well as actions of the representatives of the de facto government are uncontrolled and arbitrary and it requires timely and relevant reaction from relevant actors.

The GCICC once again expresses support to the family members of the detained Gakheladze and Mghebrishvili and calls on:

The Government of Georgia:

To the Russian Federation: