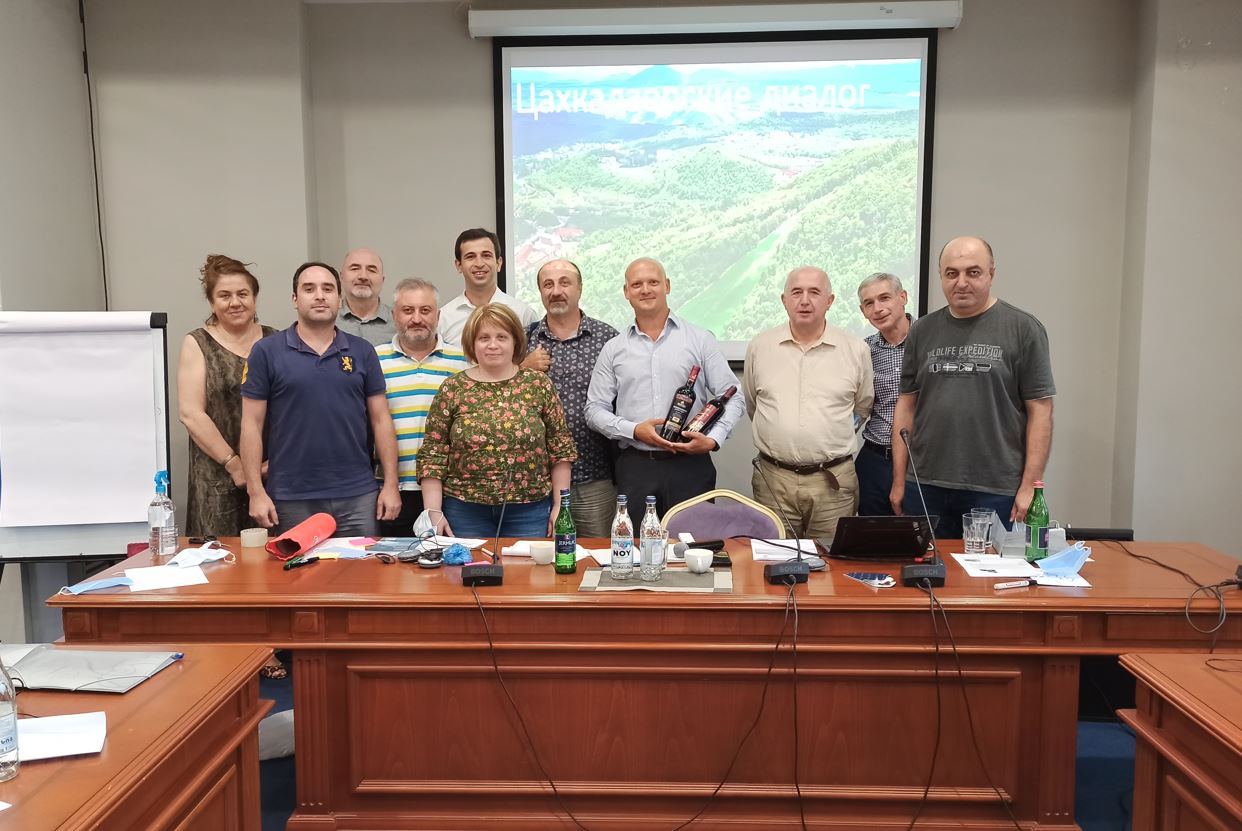 The Georgian-Ossetian-Abkhazian dialogue in one of the hotels of the mountainous resort of Tsaghkadzor in Armenia started with a minute of silence.  Participants paid tribute to the memory of Dina Alborova, Tskhinvali political scientist, civil activist, who died of coronavirus.   Consecuently, the COVID-19 and people affected by the pandemic became the first topic of the discussions.  The coronavirus has even stopped the dialogue between the parties.  The last dialogue was held two years ago, however, the Human Rights Center with the support of the Zivik program of the ifa Foundation of the Ministry of Foreign Affairs of Germany (Institut für Auslandsbeziehungen) still managed to organize this meeting.  Civil society representatives had accumulated unimaginably huge number of topics to discuss.

The pandemic, blocked roads, poor health care, situation of non-governmental organizations, human rights - in this respect, unlike Sokhumi, situation in Tskhinvali is alarming: they are closing down civil society organizations, harass and prosecute activists.

One of our speakers from  Tskhinvali requested to open an international human rights organization under the auspices of the United Nations. Civic activism in Sokhumi and Tskhinvali is at risk.  After the 5th of July it is becoming dangerous in Georgia as well.  The dialogue was facilitated by an invited foreign expert who listened carefully to all parties, and on the third day of the meeting shared his own experience related to the resolution of the conflict in Northern Ireland.

Kai Fritchof Brand Jacobsen - Norwegian expert, peacebuilder who visited all hotspots of the world under the auspices of UN, now, through this dialogue, is trying to find common ground between the parties to the conflict.  During these four days, Kai Brand Jacobsen was following  the discussions, debates, ideas and relations between Georgians, Ossetians and Abkhazians.  The first thing he did was to write "Tsakhkadzor Dialogue" on three flipcharts in three languages - Georgian, Abkhazian and Ossetian.  Finally, he shared his impressions and said that participants of this dialogue are in a position to really contribute to finding solutions to  humanitarian problems.

"I feel honored to meet you and spend time with the participants of this dialogue. People are willing to talk about their own communities, listen to each other, dedicate time, and delve into important issues and problems together.  It is obvious that there is quite a lot in common between them.  Of course, there are issues that are different in each of their communities and there are issues that all of them share, while their common desire  to have a better future is the key element that was clearly distinguished. I think it is amazing and gratifying that we can talk not only about the common topics but also about a better future that each of us wants.”

The last day of the dialogue was dedicated to the exchange of ideas and discussion of project proposals.  Conflictologist Paata Zakareishvili's proposed to create a parallel process to Geneva talks, involving civil activists and representatives of non-governmental organizations from all three sides.

There are currently  two groups in the Geneva Discussion format- political and humanitarian.  Due to political disagreements, humanitarian issues cannot be resolved either. Roads are still closed, human rights are  violated everywhere, so, according to Zakareishvili, Geneva Plus participants should offer their views to political actors in terms of solving this or that humanitarian problem.  Representatives of the three parties like the idea and shall develop it further.

"The parties agreed to keep meeting each other, and suggested that this tripartite context could function similarly to Geneva format, support the Geneva format and build relations.  It is clear that the Geneva talks are at a standstill.  In my opinion, humanitarian issues are frozen. We have some experience of reaching certain agreements at the level of mutual trust.  "We do not agree on something and it is natural, but whenever we agree, the results must be shared with the Geneva participants and show that Georgian, Ossetian and Abkhaz participants have an opinion different from that of the politicians participating in the Geneva talks, and help them find solutions," said Paata Zakareishvili.

Human rights are universal everywhere and always.  Ucha Nanuashvili, a former ombudsman and head of the Democracy Research Institute in Georgia, believes that human rights unite the three parties.  In his view, human rights should be the main topic of discussion for Geneva Plus.

"We may have different opinions and disagree on many issues but human rights is the standard that no one can deny. We often see that these issues go unnoticed by politicians, and it is important that the voices of people involved in this process and those who are primarily affected by the politics and the war that exists between us today, are heard. "It is very important for the civil society to be able to do that, and we,  Ossetians and Abkhazians agree  that we can work together, prepare specific recommendations and establish a group that will extend the format of formal talks," - Ucha Nanuashvili said.

Although Tskhinvali civil activists are persecuted by the local authorities for their participation in the civil-peace dialogues and they are trying not to be indetified, one of the Tsakhkadzor dialogue participants, a young man from Tskhinvali, agreed to an interview. Here is what Alan said (name is changed):

"First of all, as a citizen of South Ossetia, I was interested in my future.  I was interested in  people’s opinion and how they see the future. I wanted to know how these people see the ways of resolving the conflicts for the benefit of  Georgian, Ossetian and Abkhazian people.  We can achieve peace through dialogue. We have not decided anything as a result of the two wars.  On the contrary- the situation is getting worse. Somehow we have to make people realize - and it is not easy - that tomorrow depends only on peace and on us. I did not know what people from Georgia thought until now, so I came here to understand and gain some experience of dialogue," Alan replied.

- Which is the most important problem that needs to be solved urgently ? - I  asked.

"I think that this is the problem of a closed border.  This is the biggest problem for any state. We live like a canned food.  This closure allows people in power to breach justice.  Unjustice and disorder are common. I am a patriot of my country and I do not want this to happen. The quality of education within the closed borders is also low.  Our young people go to Russia and get higher education there, but I want them to be educated in Europe as well. Because of the stupidity of certain people, because of the foolish ambitions, the two most related nations quarreled with each other.  After the war, many people in Tskhinvali say: „ What is there to talk to Georgians about, what should we talk about?” I grew up in this community too but, as the years go by, I realize that sitting, mourning and steaming in this pot is not a solution. Movement, changes and conversation are necessary.  It will make a difference and I'm doing it for my country," Alan told me.

The participants of the Tsaghkadzor Dialogue are now communicating via social networks and working to develop project ideas in order to address humanitarian problems of the citizens.

The article was prepared in the framework of the project "Support to Confidence Building between Tbilisi, Sokhum/i and Tskhinval/i", implemented by the Human Rights Center with the support of Funding programme zivik of ifa (Institut für Auslandsbeziehungen),  of the Ministry of Foreign Affairs of Germany.