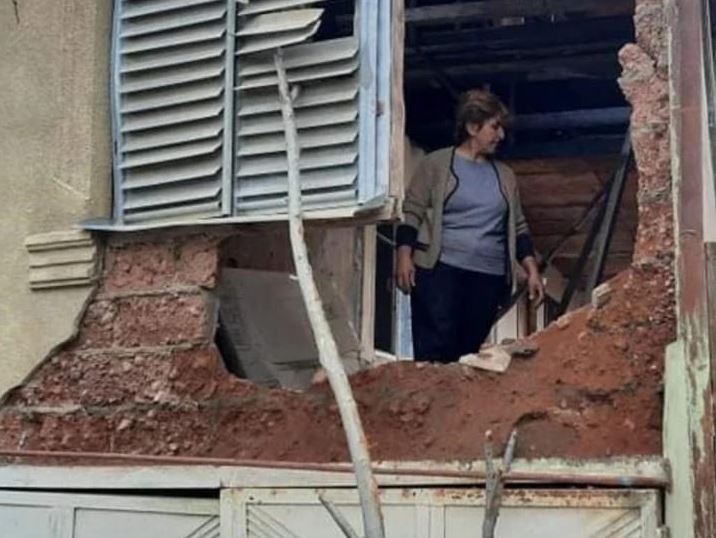 On July 30, a meeting of the Temporary Governmental Commission for Responding to the Needs of the Affected Population  of the Villages adjacent to the Dividing Line was held in Gori. At the meeting, a decision was made to start the rehabilitation of the houses damaged during the 2008 war in order to return the population back to village Zardiantkari of Gori Municipality.

The meeting of the Commission was attended by the top officials of the central and local governments, including: Minister of Infrastructure Irakli Karseladze, State Minister for Reconciliation and Civic Equality Tea Akhvlediani, Head of the Department for Regional Relations of the Administration of the Government of Georgia Leri Barnabishvili and Mayor of Gori Municipality Konstantine Tavzarashvili. Notwithstanding the two months passing after the meeting, no one has arrived to village Zardiantkari so far. No work has been started to restore the houses burned and damaged as a result of the war, and no one has provided any information to the local population.

In Zardiantkari, Tsitsino Elikashvili was returned by the authorities in 2013 on the condition that the houses damaged by the war would be rehabilitated. It is already the 8th year that she demands from the authorities to fulfill the promise and repair the houses burnt and damaged as a result of the war. She was especially encouraged by the meeting of the Governmental Commission supporting  the initiative of Prime Minister Irakli Gharibashvili  to rehabilitate the houses in village Zardiantkari. Tsitsino Elikashvili, like other villagers, hopes that the government would keep its promise this time and people from Zardiantkari would not be deceived for the third time by the government.

"At this stage, we do not have any information in the village when they are going to start the rehabilitation works. Nobody came to us, nobody told us a thing. We heard a statement from the Prime Minister that the houses would be rebuilt, but there was no direct communication with the population on this issue. Despite that  two months have passed  since the promise, so far no one from either the central or local government has contacted us. The houses are in a very bad condition. As time goes on, walls and roofs are more damaged by rain, wind and snow. Finally, after waiting so long, we managed to get this decision signed. We now have high expectations. We want the rehabilitation to start as soon as possible and all that  not be postponed,” says Tsitsino Elikashvili.

Why is the start of the rehabilitation of the houses damaged by the war in the village near the occupation line delayed? Regarding the issue, we contacted  Gori Municipality Mayor Konstantine Tavzarashvili. The mayor says that before the start of the rehabilitation, the commission should work and list the damaged houses and the residents of the village of Zardiantkari, some of whom are still staying in the buildings of Gori Kindergarten.

“We  generated a special report with   signatures of the families  confirming that in the case of house  renovations, they would return to the village. Once the affected individuals sign the report, it would  be possible to start the rehabilitation work. As you know, at this point some of them live in the kindergartens. That is why it was necessary to draw up the report. The process is already in an active phase. We have full information on what needs to be done for each house. At this stage, we are starting to communicate with each family to let them sign the report, and then start the rehabilitation,"  says Mayor of Gori Municipality Konstantine Tavzarashvili, whose term of office expires in one month and the newly elected mayor will have to take care of the project to be carried on.

Merab Makharashvili, who is a member of Gori Municipality Sakrebulo and his majoritarian constituency includes Zardiaantkari as well says that the authorities must pay special attention to the people residing near the occupation line and the rehabilitation of the houses damaged by the war must begin soon: „A special commission composed of several persons was set up 5 years ago calculating the damage in Zardiantkari. As you know, the houses were damaged as a result of the war, there were also some burnt down and robbed houses. According to my information, the damage calculated by the commission was estimated at some GEL 750,000  on average. Rehabilitation of the houses will start in the nearest future, after which the families who are unable to live in their own houses  due to this problem will be able to return home.“

In parallel with the positive assessments by the local authorities, the residents of the half-ruined houses in the village of Zardiantkari near the occupation line fear that the outcome of the house restoration project would be  same as in previous years, when the government promised to restore the houses damaged by the war, created a commission to count the damage, however did not pay any compensation for damages and even now the residents have to live in a ruined houses.