The PEC Chairperson cannot establish order in the polling station 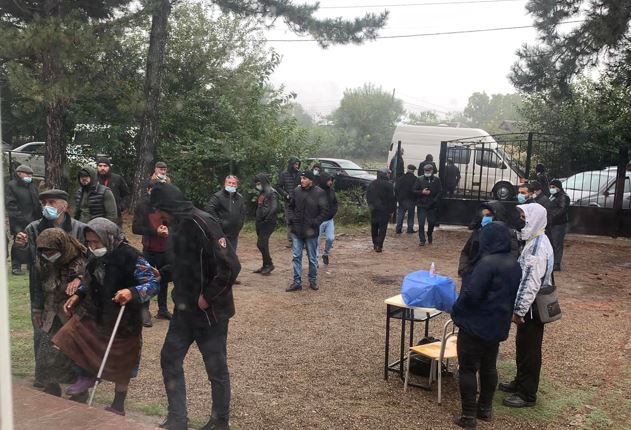 HRC observer reported that there is endless disorder in the polling station #51 in the Savaneti village, Bolnisi Municipality Election District # 23; the disorder is caused by the crowd mobilized in the precinct. The polling process is often delayed and there is a doubt that voting privacy is violated in the booths.

There were cases, when the representatives wearing the badges of various political parties tried to accompany the elderly voters into the booths.

The HRC monitor observed several violations in this particular precinct: organization “Youth Initiative for Democracy” had three representatives in the polling station that is violation of the Election Code. The HRC observer several times appealed the PEC chairperson to dismiss two representatives of the mentioned organization from the polling station that was initially satisfied; however, several members of the Youth Initiative for Democracy used to enter the polling station periodically, according to their statement because of bad weather. After the HRC observer made a note in the logbook, the PEC chairperson eradicated the problem.

At about 09:30 am, so-called coordinators of one of the political parties (supposedly of the Georgian Dream) were standing in the vicinities of the precinct # 51 of Savaneti village in Bolnisi municipality, who had controversy with the representatives of the polling company Edison Research. The controversy finished soon but the coordinators did not leave the area and actively tried to mobilize the voters in the polling station. They were looking for the numbers of the concrete voters in the voters’ lists.

The HRC observer several times asked the PEC chairperson to react to the violations but he has not eradicated the problems yet.