HRC representatives met the attorneys of the Telavi municipality mayor 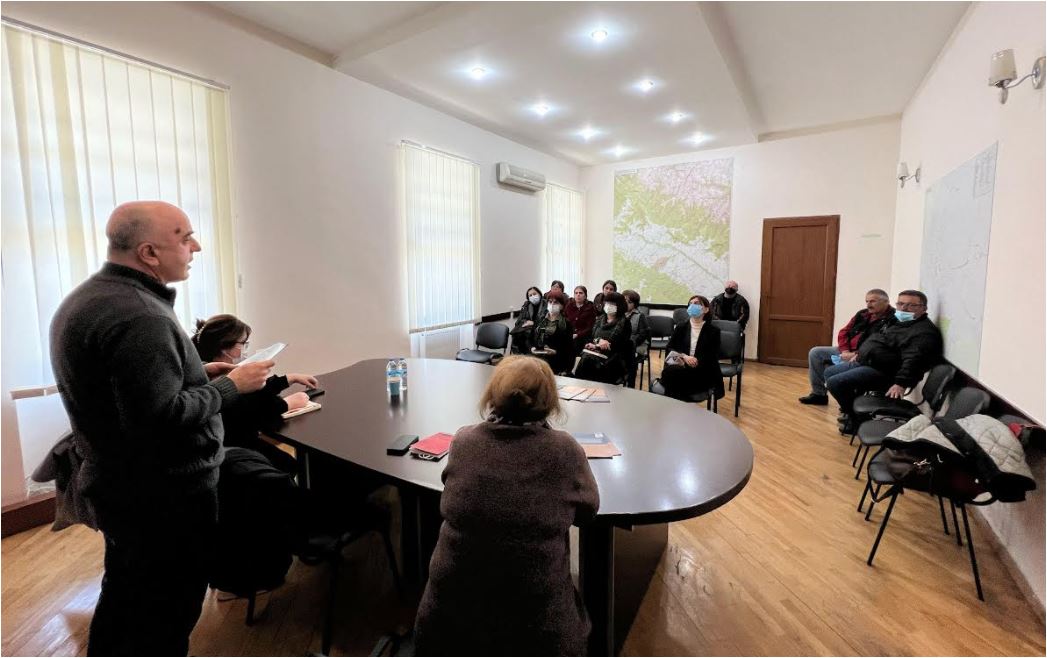 Aleko Tskitishvili, executive director of Human Rights Center, presented the findings of the HRC’s report „Legal Analysis of the Process of Property Restitution and Citizenship Restoration to Ethnic Ossetians Affected from the Conflict,” which was published with the financial support of the British Embassy in Tbilisi.

To ascertain some issues and to obtain necessary certificates needed for the proceedings, during the implementation of the Project, HRC requested public information from several municipalities of Kakheti. According to the response received from the Mayor’s Office of Telavi Municipality, 250 persons left the village of Jugaani of Telavi Municipality due to the armed conflict between the Georgian and Ossetian population in the former South Ossetian Autonomous District and other regions of Georgia during 1989-1992 and beyond. The property in the village of Jughaani of Telavi Municipality was never abandoned by ethnic Ossetians. They periodically come to see their homes. At the same time, nobody addressed the Mayor’s Office or Sakrebulo (City Council) of Telavi Municipality for the restitution of property. Ethnic Ossetian citizens who arrive periodically to Georgia do not have residence permits.

As a result of the conflict in Tskhinvali Region in the 90s of the last century, a significant portion of the ethnic Ossetian population living in the rest of Georgia had to leave their homes and be displaced outside Georgia. Most of them moved to the Russian Federation - to the Republic of North Ossetia, where a large part of them received Russian citizenship. Because of this, they lost their citizenship ties with Georgia but maintained an emotional connection as well as relations with close relatives remaining in Georgia. Nowadays part of them is willing to be citizens of Georgia again. They are trying to use the relevant legal mechanisms to get Georgian citizenship, but in this process, they are faced with different obstacles.

The village attorneys spoke about the problems caused by the 1990s armed conflicts in the villages inhabited by ethnic Ossetian people. They also mentioned the problems of the Georgian IDPs, who had to abandon their houses because of the occupation of South Ossetia by Russia and had to displace to the other part of Georgia. They recalled an example of a Georgian family displaced from Znauri, Tskhinvali district during 1990s armed conflicts, in whose house the military headquarter of the Russian occupation forces is located now.

The deputy executive director at Human Rights Center Nino Tlashadze spoke about the importance of the Law on Property Restitution and Compensations of the Persons Affected in the Territory of Georgia from the Conflict held in the Former South Ossetian Autonomous District. The declared aim of the Law is the property restitution of persons affected throughout the territory of Georgia as a result of the conflict in the former South Ossetian Autonomous District, ensuring them with adequate (replaceable) real property or compensations for the property damage. Based on the goal, the Law envisages staffing the relevant Commission under the parity principle. The Commission consists of 9 members selected from the candidates presented by the Georgian and Ossetian sides parties to the conflict and the candidates nominated under the parity principle by the subject(s) of international law. The Commission as a quasi-judicial authority to some extent is integrated into the court system. At the same time, the Commission should have developed into a faster and more efficient body. Until now, the Commission has not been established; thus the issue of property restitution for the people harmed by the conflict has not been resolved either.

The municipality mayor’s attorney in Jugaani village spoke about the current state of the properties abandoned in their village during the conflict. She also spoke about the problems related with the verbal agreements between the ethnic Ossetian people, who had to sell their properties to the Georgian people before fleeing from their villages; they did not sign official sale and purchase agreements with them and respectively it is not officially registered in the Public Registration Agency; in some cases, the heirs of the old owners start dispute against the current owners of the properties.

Human Rights Center believes that outcomes from the armed conflicts of 1990s in the territory of the former Autonomous Oblast of South Ossetia still influence the life not only in the occupied territory but also in the regions, which are under the jurisdiction of the State of Georgia.

In similar situation, HRC believes that the Commission of Restitution and Compensations shall be made operable in time, and to set a list of specific criteria, procedures, and documents based on which the restitution of property to those affected will be carried out or relevant compensations paid. It is important to amend the Law on Restitution and Compensations in a way to instruct the Government of Georgia to proactively launch the inventory taking of the property abandoned by ethnic Ossetians. Moreover, it is necessary to create statistical data identifying what part of the property is in the state ownership and how many of the property has new possessors/owners.