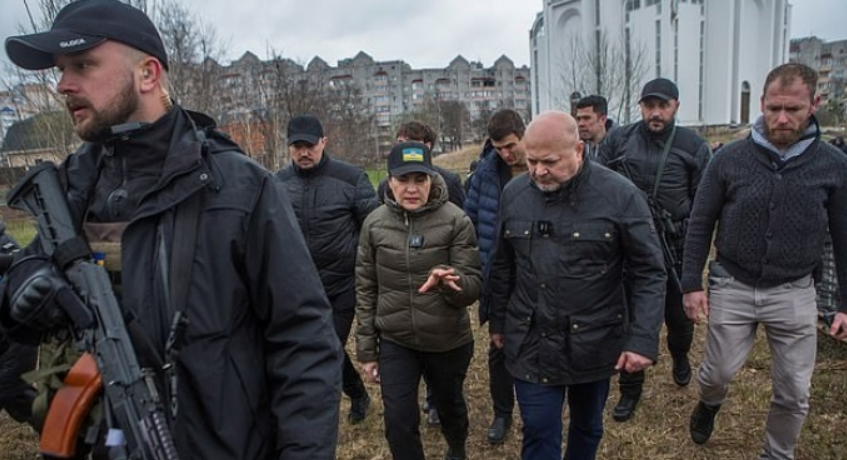 A significant development in the process of the investigation of the crimes committed in Georgia during the August 2008 War is the application by the ICC prosecutor for warrants of arrest.  ICC Prosecutor, Karim Khan, requested the ICC to issue arrest warrants against three former Ossetian senior officials. Will the ICC be able to detain and bring them to justice? Would punishing them be enough for justice to be done? Why did not the ICC prosecutor request the arrest of the leaders of the Russian government who are responsible for the crimes committed during the Russian-Georgian war?

Mikhail Mindzaev was the de facto interior minister of South Ossetia during the August War, Hamlet Guchmazov was head of the pre-detention facility of Tskhinvali, and David Sanakoev was the de facto ombudsman of South Ossetia. Further, the Office of ICC Prosecutor has collected enough evidence from the war of 2008 against the Major General of the Russian Federation Armed Forces, Deputy Chief of the Airborne Forces, Vyacheslav Borisov. However, meanwhile, Borisov died and for this simple and humane reason, it is not possible to bring him to justice.

As the ICC Prosecutor mentions in his public statement, Russian and so-called South Ossetian troops captured Georgian civilians, mainly elderly and diseased who could not or did not want to leave their homes and escape the hostilities. When being detained, the people were not informed about the reasons for arrest and were not provided with any procedural rights.  According to the prosecutor, the evidence shows that most of these people were illegally locked up in dangerous for life and health unsanitary conditions where they were abused, beaten, tortured, and humiliated. The prosecutor clearly shows that these crimes are committed under the regime of Russian occupation.

The ICC investigation into the situation of Georgia covers the crimes committed during the period from July 1 to October 10, 2008, including Crimes against humanity, such as murder, forcible transfer of the population, persecutions, and war crimes: attacks on civilians, deliberate attack on peacekeepers, destruction of property and robbery.

The Georgian Coalition for the International Criminal Court (GCICC) states that Russian political and military leaders bear primary responsibility for the international crimes committed in Georgia. It is a fact that in 2008 Russia led military operations in Georgia. If only the senior officials of the secessionist regime are held responsible for the crimes against war and humanity, it will only contribute to the sense of impunity among the high-ranking officials of the Russian Federation.  At the same time, the detention of three persons against whom prosecutor Karim Khan requested arrest warrants would be a problem.

GCICC Chairperson and Georgian Young Lawyers Association’s (GYLA) International Litigation Team Leader Tamar Oniani tells Humanrights.ge that in case the court issues the warrants of arrest against these persons, it would be significant for the effective protection of the rights of the victims to execute the warrants and the justice to become tangible in practice: "The detention of these three persons would be a challenge because since 2016 Russia is no longer a signatory state of the Rome Statute. Accordingly, Russia and its controlled territories would be a refuge for the perpetrators. Until the current form of governance is maintained in Russia, would that be under Putin or any other leader, the situation will not change substantially. Thus, the feasibility to detain Guchmazov, Mindzaev, and Sanakoev is directly related to the factor of Russia. If Russia does not cooperate with the Court, it will provide a shelter for criminals. If the offenders leave borders of Russia or its controlled territories, the prospect of executing the warrant will increase, as the 123 states members of the Statute of Rome are obliged to cooperate with the Court to enforce the judgments."

Significantly, however, the ICC prosecutor makes parallels with the situation in Ukraine stating that crimes against humanity are also clearly evident in the Situation of Ukraine.

Nika Jeiranashvili, head of an organization member to GCICC asserts that by making parallels with the crimes currently going on in the war on the territory of Ukraine there is a chance that the ICC links Ukrainian and Georgian situations with each other. If the ICC chooses this path, high-ranking officials of Russia would be more logically attainted for the crimes committed in 2008 in Georgia and 2014 and 2022 in Ukraine.  This would be logical as the committed criminal acts are of a similar pattern: the orders were given in the same manner and therefore the current Russian authorities in charge in 2008 and 2014 are responsible for the crimes committed in both countries. So there is a possibility the Hague Court unifies the investigations of Ukrainian and Georgian situations.

"ICC prosecutor, Karim Khan, easily grasped the Ukrainian situation. Until February 2022, before Russia invaded Ukraine, it seemed that the prosecutor was not going to open an investigation into the situation in Ukraine and launch an investigation into the conflict of 2014, however, now he has completely changed his position and developments show that he might apply for arrest warrants.  He could even reach Putin. At least I hope so.  Earlier it was impossible even theoretically, but now everything leads to this. Karim Khan often visits Kyiv. His staff is based there. A solid investigative group was created. There is a chance that in parallel with the investigation of crimes committed in Ukraine, the situation in Georgia would be eased,” Nika Jeiranashvili tells Huamanrights.ge.

As for the war crimes of August 2008 and the process launched against the former three Ossetian separatist high-ranking officials, Nika Jeiranashvili says that the practice of the Hague Court shows that in investigating some situations or conflicts, arrest warrants are issued against only a few persons. Georgian situation would not be an exception here and we should not expect that dozens of arrest warrants are issued: "In Hague, everyone knows that there have been crimes committed, the problem is the evidence. Especially when a long time has passed since the offenses, much evidence has been lost or destroyed, and many witnesses have died of old age or disease. Consequently, it is very difficult for the prosecutor to reach the Russian high-ranking officials, otherwise, they know well in Hague and it is clear who would have issued orders during the war of 2008. Hague investigation should be strengthened by evidence. If Hague would say without evidence that Putin is guilty of everything, this will not be a substantiated legal statement. That Putin is guilty we all know well but the Hague Court needs some evidence to prove to Putin he has issued particular orders and what were the orders that resulted in particular crimes. As for Mindzaev, Guchmazov, and Sanakoev, a large part of the materials collected by us (i.e. non-governmental organizations) were associated with inhumane treatment and torture in the Tskhinvali detention facility. Consequently, most of the material that the prosecutor had in his hands was the crimes committed in the facility. Ultimately, the prosecutor assumed that arrest warrants could be issued against those individuals on whom he had enough evidence yet hoping that once they are brought to justice they could name higher-ranking officials whose orders they were fulfilling, and then it would be possible to arrest the higher ranking criminals."

According to the GCICC Chairperson and GYLA's International Litigation Team Leader, Tamar Oniani, the ICC as a court institution does not have its own police force and it fully depends on the cooperation of the states around the world, especially when the case concerns the detention or surrender of the persons already detained to the Hague, as well as execution of judgments. The warrant of arrest remains in force until the court orders otherwise. Under an arrest warrant, the court may request a pretrial arrest, detention, and surrender of a person. Once the suspected persons are detained, in accordance with Article 61 of the Statute of Rome, after the person's surrender or voluntary appearance before the court, the Pre-Trial Chamber shall hold a hearing to confirm the charges on which the prosecutor intends to seek trial.  The hearing must be held in the presence of the prosecutor and the person charged, as well as his defense counsel. Then the court will hear the case of the charged persons. Besides the prosecution and the defense parties, the involvement of witnesses and victims is also ensured in the process. However, the court shall take appropriate measures to protect the safety of the victims and persons affected, their physical and mental health, dignity, and privacy. Besides deciding upon the issue of guilt and sentence, the court provides for the principles of paying damages to the victims including restitution, compensation, and rehabilitation.

GCICC calls on the Pre-Trial Chamber of the Hague Court to hear the application of the prosecutor for arrest warrants in due time; further, in the best interest of doing justice to the victims, and considering the severity and gravity of the crimes committed by the Russian Federation during the August 2008 war, GCICC calls on the office of ICC prosecutor to actively carry on the investigation in order not to overlook the issue of responsibility of high-ranking officials of the Russian Federation.