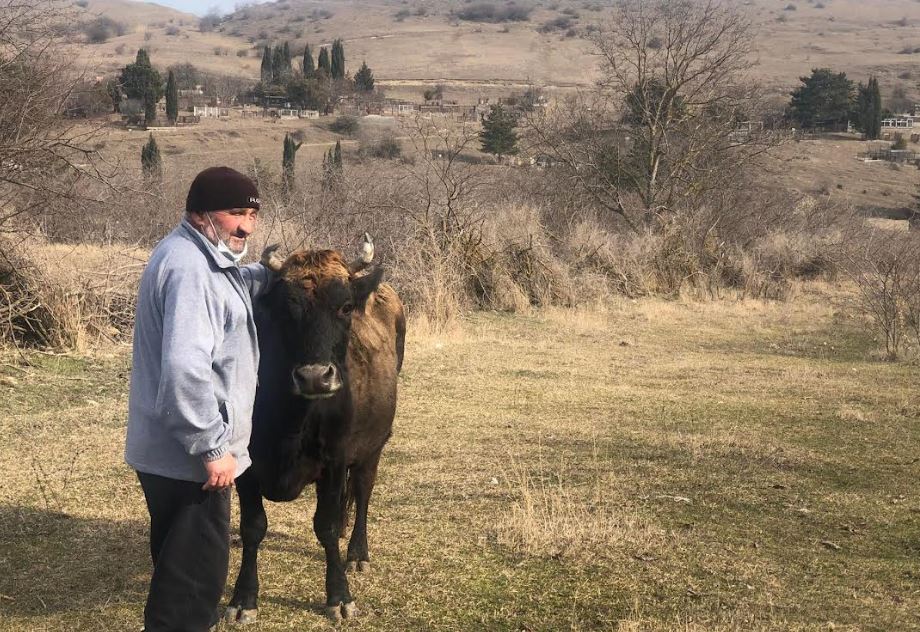 There is a boulder next to the chapel. A grey-haired man is sitting on the boulder, looking at the sun going down beyond the ridge and saying: “You know, 'Khur' in Ossetian means the sun." On the ridge, one can see a cemetery split in two after the August 2008 war with some of the graves left beyond the dividing line.

"There was a forester named Otar Tuaev. When he died, they wanted to bury him here next to his wife, but the Russians did not allow his son to bring the body over here and so they buried him over there,” says Davit Khuroshvili raising and pointing at one of the family plots in some 200 meters.

Khurvaleti, the village of Davit, is located 20 kilometers from Gori. On average, in recent years, there are around 350 households in the village. Most of them are mixed, Georgian-Ossetian families.

A small part of the population is involved in agriculture, but due to the creeping occupation,  shortage of water, and rising fuel prices, the population prioritized livestock farming. This did not turn out to be easy either. Due to the lack of pasture, it is difficult to feed the cattle.
"Nothing worth having comes easy. "Now we have problems with pastures, we were doing well in this regard in the past," says David and ... "Masho, Masho, come on, Masho," he calls the grazing cow on the slope of the ridge. The cow hurries towards him.

Georgian-Ossetian friendship makes livestock farming easy in the village. They are less afraid of losing cattle that have gone to the occupied territories for grazing. "We often drive the livestock for them from hearing up to their sites being in familiar terms with the people residing in every place like Orchosani, Tsinagara, or Dzukaantkari. I can recognize their livestock, so drive them up to their places would it be pigs or cows. . We know that the livestock belongs to them, while they ours,” says Davit and at the same patting Masho on the head saying she is the provider for their family.

Masho does not bear an ear tag.  Davit tells us that took the tag off out of caring for his Ossetian friends. "I do not want the Russians to know that the livestock is ours and so the Ossetian would get in an awkward situation ashamed of doing the cattle driving job for Georgians. So, let her be without the tag. They know the cattle is ours and they will drive the cattle down to our sites."

Luda Salia founded a social enterprise in the form of a nursing home in Khurvaleti 6 years ago. She says that the nursing home is provided with everything, but there are a lot of problems in the village.

"I do not ask anything for my nursing home. I am very sorry for the village where people wait for the rain to take a bath and do the laundry.  I believed that once the new mayor is here, he would pay attention to the issue. The Mayors Office has allocated money three times, but still, the village does not have water. "People have quarrels and fights with each other because of water," says Luda Salia.

Roin Adikashvili, the representative of the mayor of Gori municipality in the Shavshvebi administrative unit, says that a large part of the population of Khurvaleti has a 24-hour water supply, but he also admits that water is supplied to some districts under a schedule. "Part of the population is supplied with water according to the daily schedule, whereas a large part is provided during 24 hours. The water supply schedule is a result of summer. At this time the water debit is no longer available in the well, otherwise, everything is working properly. In general, no place is left without water.  As for irrigation water, the below sites are supplied with. The lake is full. Supplies are made from Nadarbazevi Lake. For the rest, there is a small portion of the population with gardens in front of the house which can not be supplied to that location,” says  Roin Adikashvili.

Some of the population in Khurvaleti refused to cultivate the land this year due to the high fuel prices. Admittedly, however, the village was managing to cultivate wheat and barley in previous years.

"You will find many uncultivated land plots in our village. On the one hand, there is the fear of the occupants and on the other hand, fuel price is GEL 4. "People calculated what it would cost them to produce the crop and changed their minds because it did not make sense," says Nikoloz Meladze.

As is known, the Ministry of Agriculture of Georgia did not provide any fuel subsidies this year.

"It is a buffer zone with the status of a highland village, still our village is neglected in such a manner. What are people supposed to do for a living?! "The state funds are spent on so many things, and it could at least have been fuel subsidies to cultivate the land," says one of the residents of Khurvaleti.

In addition to rising fuel prices, the problem is the creeping occupation. The family of Luda Salia is unable to cultivate the land left by her husband's parents because the land is too close to the dividing line and there is a risk of incidents. "The village has been significantly harassed by Russians. We are left with a single entrance from the highway as they have occupied the rest of the roads and you can see how devastated we are.   The village is being abandoned, grown old, with no children born," he says.

Civil activist Giga Makarashvili often visits Khurvaleti. Makarashvili says that most elderly people remain in the village: "There is a problem of simple foodstuff in the village. Mostly, the elderly are left behind and they find it difficult to cultivate the land. They are feeling down and find it very hard to see how the village is being abandoned.  Nothing happens in the village, there is no prospect for young people. Most of the seniors I encounter spend their entire pension on the first day on drugs, but still, often the money is not enough for all the drugs. I also know such households where the elderly live alone and can not even get out of bed, so they are left in the lurch."

According to Gori Mayor’s Office, there are no social programs as such immediately for the population of the villages adjacent to the dividing line, but the population of these villages can also benefit from other assistance packages. Medical care for oncology patients, socially vulnerable, provision of free medicines, social assistance for people on dialysis, assistance to students and athletes, ritual services for the deceased, and so on. - This is an incomplete list of the items of the social program of the Gori Municipality Mayor’s Office.

HRC is actively involved in human rights advocacy in Khurvaleti. "As a result of erecting barbed wire, the population is restricted access to agricultural land, pastures, and irrigation water, which is the main source of income for the local population. "There are cases when, as a result of installing the barbed wire, some of the houses were found in areas controlled by de facto authorities," reads the report prepared by HRC in 2019.

It is 14 years since the August 2008 war. Socio-economic problems are still relevant in the villages of the dividing line. To the question of what the people of Khurvaleti regret the most, Davit Khuroshvili answers: "We lost so many close people ties. Not speaking of the territories ... People of my generation will reconcile again as we do remember each other well, we stood next to each other, we shared bread, and in bad times and good times we were inseparable. It would be difficult for the new generation to reconcile unless elders like me stand next telling how integral we were."