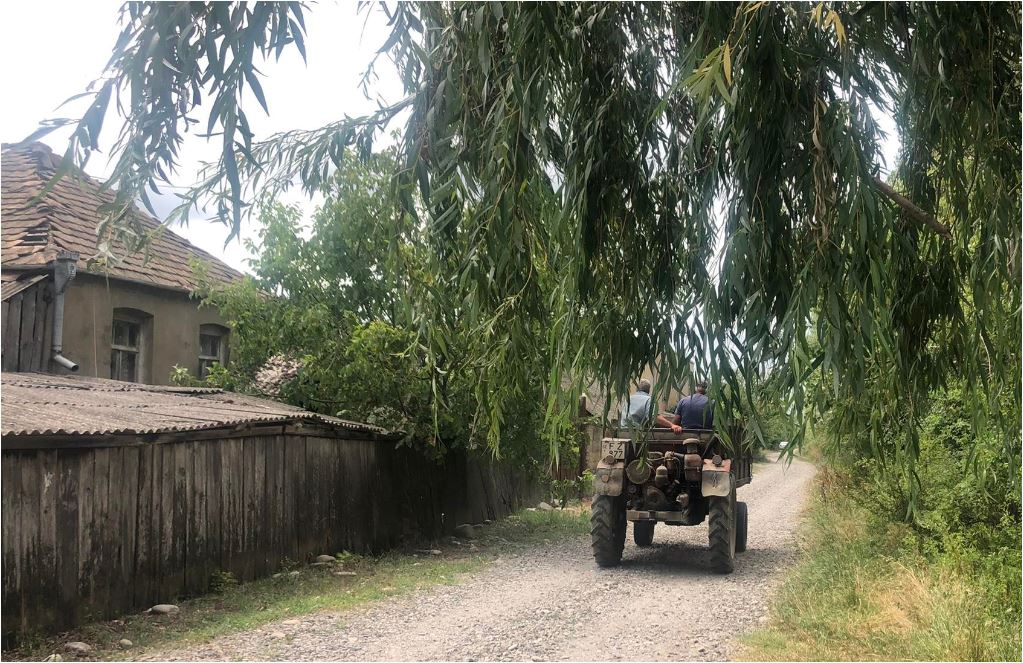 "We are afraid of something unfortunate would happen here as well," said 72-year-old Tsiuri Dvalishvili, who lives in the village of Tsitsagiantkari near the dividing line in Gori municipality. According to her, the conflict that began in the neighboring village of Karbi over the irrigation issue had fatal outcomes. A 33-year-old man died hit with a stone by a 70-year-old woman. The residents of Tsitsagiantkari say that because of the irrigation issue, conflicts are frequent in their village.

"My eyes are watering when I look at my plants and seedlings. I feel sorry for them as they must fall away. I do not let my boy out. I am afraid he would get into trouble,” says Tsiuri Dvalishvili.

A large part of the income in Tsitsagiantkari comes from farming and livestock, but in recent years the villagers cannot cultivate the land. Some of the residents had to sell their cattle, as no pastures were practically available to the village.

How on earth can we earn our bread? We have land but cannot cultivate it as we are afraid that our plants and seedlings would be left without irrigation and fall away. No livestock and pastures are available to us anymore. On the one hand, this creeping occupation and on the other hand sold and disposed land. The village is hardly alive, and there is no one to take care of us,” says Koba Tsitsagi.

Land cultivation for a large part of the rural population remained the only means to survive. Therefore, the problem of irrigation is the most acute one.

"One part of the village is supplied with water, and the other part is not. Often, I carried a gun with me when irrigating my garden. I would not shoot, but they will have a fear, it does not work otherwise,” says one of the residents of the Tsitsagiantkari.

"I got high blood pressure and we could not find a doctor in the village, while the ambulance arrived 40 minutes later. We, only the elderly is left, and we do not know on what to count. Well, there has been a cottage for the outpatient facility erected, but we never saw it open. For what thousands of lari were spent, we do not know,” says Bagrat Tsitsagi, 75.

Bagrat Tsitsagi says that a large part of the population in the village are senior citizens. According to him, for years the primary school is closed and not operating in Tsitsagiantkari: "Because of the scarcity of children, the school is closed for years now. Children attend the school in the neighboring village. We, only the elderly is left in the village. To set the outpatient clinic in operation is a vital issue for us."
Human Rights Center was given assurances already in 2019 from the Gori Mayor’s Office that the outpatient clinic would become operable in Tsitsagiantkari. However, after 3 years the problem is still unresolved.

"The locals told us that the cottage was built in the winter of 2022, but its operation is suspended, and the doors of the clinic were never opened. Unfortunately, the projects that are implemented in a particular settlement do not usually serve the real needs of the locals and are done only for PR reasons to state, for instance, that there is an outpatient facility in Tsitsagiantkari. Finally, all these cause doubts that the main motivation in carrying out such projects is not to take into consideration the needs of the population but to check certain political scores in front of the public, and in most cases, the signs of corruption here are not excluded either,” states Lekso Merebashvili, the lawyer of HRC.

To study the issue, Humanrights.ge reached Tariel Vatiashvili, the representative of the Gori municipality Mayor to the Akhalubani administrative unit (to which Tsitsagiantkari is a member); Vatiashvili stated that the agency is informed about the problems.

"The problem of irrigation will be solved in the near future, as for the outpatient facility, the cottage is there, but the electricity cable is not yet connected, and no equipment is brought for the clinic. I have informed the Mayor's Office about the issue and as far as I know, the resolution of the problem is on the agenda,” stated Tariel Vatiashvili.

Tsitsagiantkari residents also mention the scarcity of garbage bins and the spontaneous landfill sites. "There are not enough garbage bins available and even those are placed along the main road only. Part of them is damaged. At the entrance of the village, there is a spontaneous landfill site. Here the residents of neighboring villages dispose of their garbage. Many times, we have applied to the Gori Municipality Mayor’s Office and its representatives to solve the problem, but they advised us to negotiate the issue with the residents of the neighboring village. Meanwhile, the problem remains."

The agency responsible for the provision of public amenities in the Gori Municipality has done several works for eliminating the spontaneous landfills on twenty separate locations. This problem is still unsolved in Tsitsagiantkari.

“How can I respond to you where the residents of the neighboring village dispose of the garbage?! Adding the garbage bins is not planned, but we do remove the waste periodically,” said Giorgi Barjadze, head of the amenities Agency.

HRC implements the project Fighting Impunity for Crimes Committed during the August 2008 War and Persistent Violations of Human Rights in Conflict Areas, which includes visits to villages near the demarcation line, identification of problems, and advocacy for ways to resolve them.