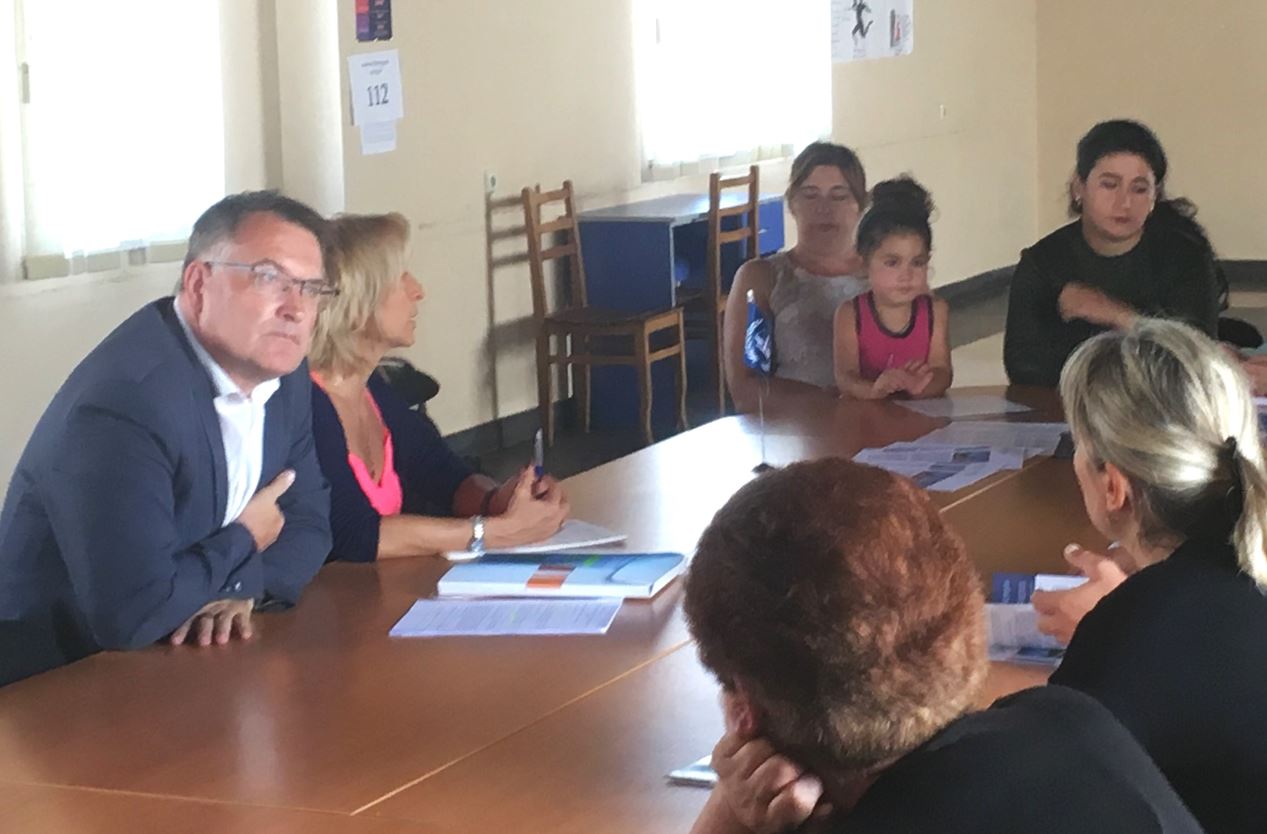 Kaupo Kand: “As the ICC doesn’t have enforcement powers, it will now rely on its State parties and/or other States to execute the arrest warrants at the earliest opportunity”

August 8 marked 14 years since the 2008 Russia-Georgia armed conflict. The war crimes and crimes against humanity committed by the Russian Federation during the war are still unpunished. These crimes have been under the examination of investigative organs of International Criminal Court (ICC) for 14 years: the ICC Office of Prosecutor (OTP) carried out preliminary examination during 2008-2015 and the official investigation has been ongoing since 2016 to date. The first tangible result from the investigation came just recently. In March 2022, the Prosecutor Karim Khan applied to the Pre-Trial Chamber with the request to issue arrest warrants against three persons who were holding positions in the de facto administration of South Ossetia during the events of the 2008 August War. The Prosecutor's application concerns one particular episode of the 2008 August War, namely, the unlawful deprivation of liberty of 171 ethnic Georgian (or those perceived as Georgians) civilians and their placement in the preliminary detention facility in Tskhinvali where following crimes were committed against them allegedly: unlawful confinement, torture and inhuman treatment, hostage taking and unlawful transfer. In June 2022, the Pre-Trial Chamber satisfied the request of the Prosecutor and issued arrest warrants against the aforementioned three persons.

Humanrights.ge spoke with Kaupo Kand, the Chief of ICC Country Office in Georgia, regarding the developments in relation to the investigation, subsequent processes and rights of victims. The interview touched upon the projects planned by the ICC Trust Fund for Victims in support of victims in Georgia as well, the impact of the pandemic associated restrictions on the work of the Court and the Country Office, the activities carried out by the Country Office in the recent years and its future plans.

1) Could you please tell us how the coronavirus pandemic and the accompanying restrictions affected the work of the ICC Country Office in Georgia and ICC's ongoing investigation in relation to the 2008 Russia-Georgia August War?

The ICC Country Office in Georgia was impacted by the Covid-19 pandemic similarly to other international organizations, institutions, and missions. The entire ICC worked mostly on-line during the pandemic, and because of travel restrictions fewer missions were carried out, including to situation countries like Georgia. However, the pandemic did not prevent the ICC from continuing its work in the context of all situations. As you can see, for example, in the Georgia situation, new Prosecutor submitted, in March 2022, an application under art. 58 for the issuance of arrest warrants against three individuals (Mr Mindzaev, Mr Guchmazov and Mr Sanakoev).

Because of various restrictions, the ICC Country Office in Georgia didn’t manage to carry out all planned face-to-face meetings with conflict affected communities, including victims, but we tried to have these outreach meetings when the Covid-19 situation and restrictions allowed it. For example, together with the Georgian-American University and the Levan Aleksidze Foundation (LAF) we organized a public outreach event last summer marking the International Criminal Justice Day in Tbilisi. This included also a small photo exhibition “Life after Conflict” by the National Geographic award-winning photographer Pete Muller, who travelled to Georgia to document and tell visual stories of the experiences, healing, and empowerment of conflict affected communities. Many participants were very impressed by these photos and moved by the stories behind them. The “Life after Conflict” exhibition remains available online, and is a valuable tool to share stories of the conflict affected communities around the world.

We are also very happy that when the Covid-19 restrictions allowed, we manage to organize a face-to-face workshop with our outreach network on the ground in November last year. This event brought together community leaders, NGOs, IDPs, and local municipality representatives from various IDP settlements and villages near the Administrative Boundary Line (ABL) area. Participants had a chance to interact with a representative of the Trust Fund for Victims, and ask questions about the TFV’s upcoming assistance mandate program in Georgia.

In addition to face-to-face meetings, the ICC Country Office continued to have various online meetings during the pandemic period, including with academia, representatives of the civil society, NGOs, and other interlocutors.

2) In March 2022, ICC Prosecutor, Karim Khan addressed the Pre-Trial Chamber and requested issuance of arrest warrants against 3 persons who held positions in the de facto administration of Georgia's breakaway region, South Ossetia during the 2008 August War (Mikhael Mindzaev, Gamlet Guchmazov and David Sanakoev). The Pre-Trial Chamber recently satisfied the request of ICC Prosecutor and issued arrest warrants for these three individuals. The arrest warrants concern the alleged crimes of unlawful confinement, torture and inhuman treatment of ethnic Georgian civilians, as well as the crime of hostage taking and unlawful transfer.

Could you please tell us what the possible subsequent ICC processes are, following the Pre-Trial Chamber’s decision on the issuance of arrest warrants? What is the role of the ICC Country Office and what are the rights of victims in these processes?

Based on the Prosecutor’s application, Pre-Trial Chamber I (PTCI) issued arrest warrants for these three individuals on 24 June, 2022. The public redacted version of these arrest warrants were issued on 30 June 2022. PTCI decided that there are reasonable grounds to believe that these three suspects are responsible for crimes under the jurisdiction of the ICC and within the scope of the Georgia situation.

As the ICC doesn’t have enforcement powers, it will now rely on its States parties and/or other States to execute the arrest warrants at the earliest opportunity. As directed by PTCI, the Registry will prepare and transmit, in consultation with the Office of the Prosecutor, requests for cooperation to States seeking the arrest and surrender of these suspects.

When a suspect has been arrested, the State who conducted the arrest will inform the Registry when the suspect is ready for surrender. Once transferred to the seat of the Court, a first appearance will be scheduled by the Judges.

In line with the Rome Statute the victims of a case have the right to participate at the different stages of proceedings. In the ICC Courtroom, they are generally represented by a legal representative of victims who presents their views and concerns to the Judges. Victims interested to participate must apply in writing by completing an application form for participation in the proceedings. The Judges are the ones who decide who, when and how victims may participate in criminal proceedings, by taking into account the victims’ personal interests and the rights of the suspect/accused.

The ICC Country Office assists the various sections of the Court during each stage of the process by amongst others supporting missions and the activities on the ground.

Could you please tell us what have been the developments since the aforementioned decision? What kind of activities have been carried out by the TFV for the implementation of the assistance program in Georgia? At what stage is the process now and what kind of assistance projects are expected to be implemented for benefit of the victims in Georgia? What has been the role of the ICC Country Office in these processes?

After this TFV Board’s decision several steps were taken by the TFV, supported by the ICC Country Office and other relevant units of the Court. The TFV conducted a tender process in order to select partner(s) to implement its assistance mandate activities in Georgia. The Country Office helped the TFV in promoting the call for Expression of Interest (EoI) and a Request for Proposal (RfP) among potential implementing partners. The TFV evaluated several project proposals and selected the best qualified implementing partners for its upcoming assistance activities in Georgia. On 29 April 2022, the Board of Directors of the TFV also notified PTCI of its plan of specific activities in Georgia. On 16 June 2022, PTCI informed the TFV that the proposed activities do not pre-determine any issues to be determined by the Chamber. In line with its proposal the TFV will provide physical and psychological rehabilitation for the benefit of victims and their families of the 2008 August armed conflict. At the moment the TFV’s contracts are being finalized and should be sent to relevant implementing partners soon. The TFV is also intending to hire a few staff members in Georgia, in order to oversee the implementation of these assistance projects. The Country Office, in close cooperation and coordination with the TFV will assist the TFV to carry out relevant outreach activities in Georgia related to the upcoming TFV’s assistance programme.

4) Almost 14 years have passed since the 2008 Russia-Georgia August War. ICC Prosecutor’s recent application to the Pre-Trial Chamber, mentioned above, is a step forward in the process of investigation. However, considering the length of the time passed, many civil society actors fear that the justice has been unduly delayed for the victims. According to this criticism, if justice was served in more prompt manner for the crimes committed during the 2008 Russia-Georgia August War, it may have prevented commission of similar crimes by the Russian Federation in Ukraine. What can you tell us in response to this criticism regarding the ICC?

Because of the highest international legal standards, complexities, and various challenges, the international criminal justice processes, be it in ad hoc tribunals, or permanent court like the ICC, takes usually longer than national judiciary processes. As it was pointed out above, the Pre-Trial Chamber decided to issue arrest warrants for three individuals at the end of June, 2022. The existence and universality of the Rome Statute system are the best preventive measures to end impunity and bring justice to victims of these types of crimes around the world.

In addition to supporting all parts of the Court vis-à-vis the Georgia situation, the Country Office continues to raise awareness about the ICC and its activities in Georgia, including the Trust Fund for Victims (TFV) assistance programme. One of our latest outreach activities took place in July this year, when we participated in the international conference “International law in the face of war” in Tbilisi and explained to both local and international participants working in this field the mandate, work, and activities of the Court in Georgia. We aim at providing accurate information to affected communities, civil society, academia, media, and other stakeholders, in order to avoid misinformation and misconceptions. We intend to continue with grass-root level outreach activities in IDP settlements and villages with affected population and manage their expectations. We are continuing with our Information Sharing Meetings (ISM) with relevant NGOs and civil society representatives, especially the ICC Coalition, who are working with affected communities, in order to provide accurate information, exchange information, and receive feedback. We are continuing our contacts and providing information to relevant state institutions, diplomats, journalists, and legal professionals, in Georgia.

The majority of victims and affected communities we have been meeting over the years in IDP settlements and villages near the ABL area in Georgia are mostly concerned about difficult economic situation, jobs, income, security, and well-being. Nearly all of them have expressed their strong wish and will to return to their homes. At the same time I would say that the majority have expressed quite realistic expectations towards the ICC and its work, despite some expression of dissatisfaction on the time the process takes. During our outreach meetings there have always been many questions regarding the current state of play of the ICC’s investigations, but also increasingly about the upcoming TFV’s assistance mandate activities in Georgia. The civil society, NGOs, and academia are interested in more specific and detailed information about the work and activities of the ICC and the TFV in Georgia, including personnel and budgetary issues, mandate modalities, timelines, etc. The local media is mostly interested in any new developments related to the investigations.