“I Must See Roland Akhalaia in Prison Next to His Son” 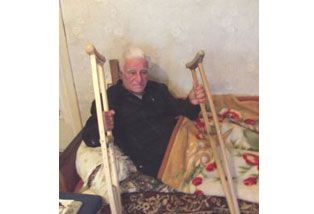 76-year-old Murman Rogava from Zugdidi spent almost 6 years in prison and left it in wheelchair. I met the former prisoner in the rented flat in Mukhiani district, Tbilisi.

Murman Rogava: “At the end of 1997 my relative and I purchased a territory in Zugdidi. We wanted to construct a trading center there. When we started cleaning of the territory, Roland Akhalaia summoned me to the prosecutor’s office (he was ordinary prosecutor at that time) and told me he wanted to have share in our business. Law enforcement bodies controlled everything at that time and I replied to him he could join our business with his own money. Akhalaia said he had no money. I told him he could use his influence and supply us with construction materials. He refused and requested to give share without any participation and to register his shares in documents as well. So, I told him I would not give him anything; my partner also attended this dialogue.

My partner told me, he [Akhalaia] would not leave us alone and he did not want to stay in our business. So I remained alone and did not have money to renovate the facility; I had spent entire money on the purchase of the territory. So, I decided to sell it but nobody wanted to buy it. Soon, Roland Akhalaia had problems at work – his employees nailed the door of his working room. Meanwhile, I found partners and started business – we had 310 counters in the market. In 2004, everything went upside down… Akhalaia returned and suddenly security officers came to our office claiming there was a grenade there. A wagon was standing in the market yard, where I had an office. I had plates and dishes in one corner and saw security officers put grenade there. I started crying and even wanted to seize automatic gun from them. They arrested me. I did not sign any document but since I had heart problems, I had heart-attack and they took me to Zugdidi hospital. Next day they sentenced me to three-month imprisonment. From there I was taken to Tbilisi jail hospital.

-what was official accusation against you?

-Illicit possession of hand-grenade and resistance to police officers. I confess that I had really slapped the police officer. Judge sentenced me to two-year conditional sentence but Roland Akhalaia did not stop. After the Rose Revolution, he became Samegrelo-Zemo Svaneti regional prosecutor. On April 13, 2007 he arrested me under new charge. This time, they fabricated absurd case against me and tried me – 70-year-old man for the robbery of 30 lari (?!) It is ridiculous but fact that I was arbitrarily sentenced to eight-year-imprisonment. Then Kutaisi Appeal Court reduced my sentence at two years. Prosecutor Khvitia was making speeches at the trial and during breaks he was agreeing details with Akhalaia.

I had leased 30-hectares of land in Grigorisi village, Zugdidi district. I had 53 different poultry and animals there. I had private zoo with deer, ostriches, kangaroos, lama, different species of roes in it. Akhalaia destroyed everything. They did not leave me alone until I was bounded to wheelchair… I was taken to Kutaisi prison from Zugdidi on January 7, 2008. We were in horrible conditions; sewerage water was leaking in our cell from the upper floor; we could not eat because of smell. I felt bad and asked for doctor. It was about 10:00 am. Prison employee Onise Tepeshadze led me into the room. Officer-on-duty was there too. Onise Tepeshadze told him something but the boy refused. Tepeshadze slapped me in the face, I also slapped him back and his lips started blooding. It is difficult to speak what happened afterwards…

He pushed me down and kicked and beat me with fists. He was beating me with chair too; it was so painful that I could not even resist him. When I recovered, nurse was trying to assist me. Tepeshadze told her to make injection to me. I could not move but managed to resist them. Tepashidze ordered to call officers and the officer on duty brought three others. They took me out of the room. Tepeshadze ordered them to leave me in the morgue.

Hearing that, I realized that they were ready to everything. They took me to the basement to prevent other prisoners to hear my screaming. Tepeshadze was following us and at the door of the morgue he told me, if you do not want to enter there, make a deal with me. I got afraid of the morgue and I agreed. Then he told me I would learn the reason of my beating later because it was ordered. Of course it was ordered by the Akhalaias. Three months later I was taken to the Tbilisi prison; if I had stayed in Kutaisi, I would have died.

Avchala prison had good director – he immediately placed me in prison hospital. My spine was damaged. They even operated me but it was useless; I am bounded to the wheelchair though it is merit of Temur Tabagua, director of Avchala prison, that I am alive now. He personally brought the wheel chair to me. He was taking care of me during many months – he was feeding me because I could not move. Roland Akhalaia had destroyed my life. I petitioned for early-release because of my illness but they refused. I left prison only six months earlier.

I must see Roland Akhalaia in prison next to his son. Let him sell his property and reimburse my medical treatment. He placed me, 70-year-old man in prison and moreover, broke my spine with beating.