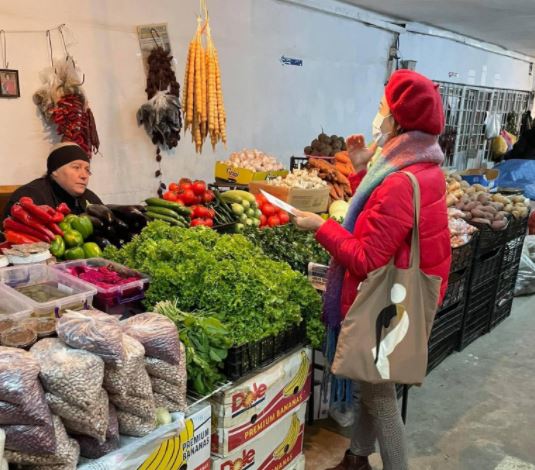 Human Rights Center (HRC) completed the project “Free Legal Advocacy and Human Rights Monitoring after the Coronavirus Pandemic” which started from  July 1, 2020. During a year, HRC has assisted numerous  individuals in restoring the violated rights.

Following the announcement of a new Coronavirus (COVID - 19) as a pandemic by the World Health Organization (WHO), a state of emergency has also been declared in Georgia.

The state of emergency was in force in Georgia from March 21 till May 23. During this period many regulations and restrictions were enacted to stop the spread of the Coronavirus pandemic: The public transport has stopped working, the car traffic, public gatherings were banned, and from March 31 the curfew was enacted which is operable up to the date.

Many businesses have stopped  in Georgia due to regulations and restrictions, and many shut down completely leaving hundreds of thousands of people without jobs and the only source of income. Thousands of people were left without assistance and the rights of many citizens were violated during and after the state of emergency.

The project “Free Legal Advocacy and Human Rights Monitoring after the Coronavirus Pandemic”, which was implemented in Georgia thanks to the financial assistance from the Embassy of the Netherlands, was launched by HRC on July 1, 2020.

Georgia faced difficult challenges due to the regulations adopted  to stop the pandemic.,  The number of persons deceased and diseased  from the infection as well as the increased number of human rights violations speak about the severe consequences of the crisis. On the very initial stage of the project, among the identified issues some acute ones were the constitutionality of the measures adopted by Georgian authorities in response to the crisis and in some cases the necessity and proportionality of the measures. As an acute problem remains up to the date the practice of making the legislative amendments in response to the crisis in circumvention of the principles of a democratic state, and in some cases weakening the Parliamentary control. The amount of the fines adopted for violations of the quarantine measures and the rules of self-isolation did not fit and take into account hard social and economic problems existing in the country even more exacerbating the social and economic situation of the population under the pandemic. We visited the regions, met people, among them were many whose rights were violated during the pandemic, but they did not know how to protect their own rights, or had no means to hire a private lawyer. Through this project HRC carried out qualified, free legal assistance to persons, whose rights were violated during the state of emergency and who needed the most  the free legal aid,” - states the director of HRC Nino Tlashadze.

Within the framework of the project “Free Legal Advocacy and Human Rights Monitoring after the Coronavirus Pandemic”, HRC was active in Tbilisi and 5 regions of Georgia: HRC studied the facts of violation of human rights during and after the state of emergency caused by the Coronavirus pandemic in Shida and Kvemo Kartli, Kakheti, Imereti and Samegrelo, identified the main trends in violations of human rights and provided qualified legal aid to the abused individuals.

Within the project, from August 1, 2020 till June 1, 2021, the lawyers of HRC have assisted  1842 persons with a free legal advice. During this time four lawyers involved in the project processed  125 cases, from which 48 were completed successfully. Seven beneficiaries refused to carry on the proceedings, while in one case the court rejected the claim of HRC. HRC lawyers are still working on the remaining 70 cases.

Fifty four out of 125 cases processed by the HRC  lawyers  relate to fines for violations of Covid regulations, 5 of these were completed successfully (six persons changed mind to proceed with the disputes), while the lawyers continue to work on the rest of the cases.

V.T. became a victim of humiliating and inhuman treatment by the police.

According to V.T., during the state of emergency, while he was riding a bicycle close to his house, the policemen verbally abused him without any reason and  by using a force seized the mobile phone through which the victim took a video of the illegal action of the police. After seizing the phone, they put him in the car, where he was beaten. His beating continued at the police station as well.  Then he was locked in a room for 4 hours.

Despite the fact that V.T. had unbearable pain and asked for medical aid, the police neither called a doctor nor gave him a painkiller. Further, the detained was not given the right to call home or a lawyer. According to V.T., the police officers were entering the room, laughing at him, swearing at him and threating him with death.

HRC has exhausted all the legal mechanisms on the national level to defend the interests of V.T., despite this he still is not recognized as a victim. HRC has prepared an application to be sent to the European Court of Human Rights requesting the recognition that the State could not ensure the protection of the rights for V.T.

Commercial banks have deducted GEL 200 allowances provided by the State in January 2021 against debts for individuals affected by the Coronavirus pandemic.

“Eleven individuals applied to HRC with such a complaint. HRC disseminated a special Appeal stating that the main purpose of the Anti-Crisis Plan to assist citizens affected by the Coronavirus had failed, and called on the commercial banks to return the money seized  to the unemployed persons. After the release of the appeal of HRC the Banking Association of Georgia got involved in the case. Following their request, an online session was held with participation of HRC representatives and the Banking Association and the representatives of different commercial banks. After getting familiar with the information, eleven people were refunded by the banks. However, the most important was the fact that this case had a precedent-setting character and beside the beneficiaries of HRC, the similar problem was resolved for other users,” - says HRC lawyer Eka Lomidze.

HRC has assisted several persons whose  payable loans at commercial banks were inadequately increased  during the pandemic:  Following the recommendation of the Government, the commercial banks offered a three-month deferral on the loans to the persons affected by the state of emergency due to the spread of the Coronavirus. Many have taken an advantage of this offer. Among them was the beneficiary of HRC, N.K. residing in Tbilisi, whose overall loan and the term of its repayment have increased in much greater terms under  the restructuring scheme proposed by the bank. HRC assisted N.K. in resolving the problem.  With the mediation and free legal assistance of HRC, similar problem was resolved for several persons.

Pandemic and children left without the right to education

In order to stop the Coronavirus pandemic, schools were closed in March 2020 and 661 500 children switched to online learning mode. Online learning has aggravated and outlined the existing harsh social problems in the country. Up to 10,000 children who did not have Internet and computer at home were restricted in the right to education. The fate of those families which had several children of a school age became particularly tough.

“Within the project, HRC paid particular attention to the most vulnerable groups. We requested public information from the local self-government bodies and determined who was in need, sometimes we were approached by people themselves for legal aid. Among them were people whose children were not able to receive an education because of tough economic situation and not having computer or Internet. I applied with a petition to the Ministry of Education to assist a child living in Kutaisi who could not attend online classes because of a damaged computer. The Ministry  fixed the computer and the child could continue to study. Further, we petitioned local self-governments and requested to assist several needy families in economic empowerment. This was a one-time financial assistance, however such a one-time allowances occurred to be very important for many parents left unemployed due to the pandemic,” - says HRC lawyer Ana Chapidze.

HRC provided free legal aid to those people who could not use the assistance offered by the authorities within the Anti-Crisis Plan.

The Government of Georgia presented the Anti-Crisis Plan on April 25, 2020 to mitigate the consequences caused by the pandemic. For the implementation of this plan GEL 3.5 billion was allocated from the budget.

In accordance with  the decision by the Government, from May 2020, during 6 months monthly allowance of GEL 200  was given to individuals who  were left without jobs due to the state of emergency introduced under the Coronavirus pandemic, or to those persons who were released on unpaid leave.

According to official information, 350 thousand persons lost jobs due to the Coronavirus pandemic. GEL 460 million was allocated for their assistance. Despite this, many persons who lost their jobs were left without the allowance.

Within the Anti-Crisis Plan, the authorities paid  one-time  allowance of GEL 200 to all children under the age of 18. In order to receive  GEL 200 allowance, the parents had to fill a simple application form on the web-page daxmareba.moh.gov.ge. However, many parents could not register their children on this portal.

With the assistance from HRC lawyers, the persons received their due allowances who lost their jobs due to the pandemic, but because of the technical defect or the irresponsibility of the employers were left without the compensation.  With the assistance and mediation from HRC lawyers, GEL 200 allowances was paid to those parents of the minors   who could not register their children due to incomplete documents or technical malfunction of the web-page daxmareba.moh.gov.ge.

Many farmers residing in the village were left without  diesel offered in beneficial price within the anti-crisis plan.  Within the Anti-Crisis Plan, the government has offered all the farmers, who had registered land from 0.25 hectares to 100 hectares, to buy diesel fuel for GEL 1 which is less than the market price.

For instance, the farmers residing in Tsalka were not able to use the benefits. As it turned out, the gas stations of the company SOCAR, which was selected by the Ministry of Agriculture as a provider of a cheap diesel, was so far from their villages that there was no point of going there to buy the diesel.

HRC appealed to the Government of Georgia with a special statement regarding the state subsidies and related problematic issues.

“Moreover,  thanks to this project we provided qualified legal assistance to persons, which required it the most  due to economic hardship caused by the pandemic (within the project we processed  much more cases than we had expected), we will share the monitoring results and main findings with the legislative and executive authorities.  This will allow them to deal with a similar crisis in the future with less human rights violations,” - says project director Nino Tlashadze.

HRC has also offered some recommendations to the Government and called for taking into consideration the problems and needs of different groups as much as possible while drafting anti-crisis plan documents and select more simple and flexible procedures for effective realization of the objectives set by the Anti-Crisis Plan.