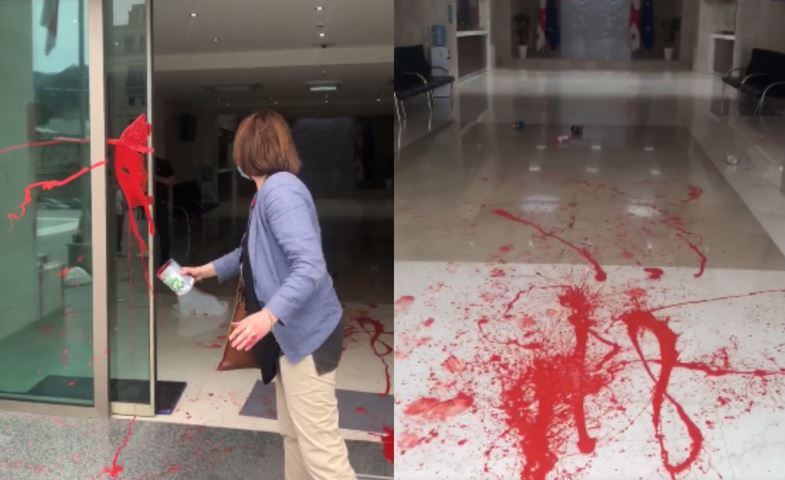 On October 5, Tbilisi City Court held Elene Khoshtaria,  the leader of the political party Droa/It’s Time, liable for violating Article 166(1) and Article 173(1) of the Code of Administrative Offenses of Georgia. Pursuant to Article 36 of the same Code, she was fined GEL 2,200 in an administrative penalty.

On July 11, 2021, in Tbilisi, on the day of the protest rally because of the death of Lekso Lashkarava, the cameraman of TV Pirveli, Elene Khoshtaria flashed the red paint over the wall of the premises of the Government Administration. Despite the warning from police officers, Khoshtaria did not obey them and due to petty hooliganism and insulting a police officer, a report of administrative offense was drawn up against her.

Elene Khoshtaria did not appear at the hearing scheduled on September 15 at Tbilisi City Court. Khoshtaria did not appear to the court hearing the case of the administrative offense in October either.  She explained to the court clerk working with judge Koba Chagunava, and to media representatives that she did not trust the courts in Georgia and was not going to take part in the hearing. Despite her statements, the judge adjourned the hearing once again as he deemed it necessary to inform Elene Khoshtaria once again of the date of the next hearing, so that she could attend the testimony of the police officers having drawn up the administrative offense report and pose her questions to them.

Upon completion of the examination of the evidence, the representative of the police presented their arguments to the court. Tamar Jokhadze emphasized that the totality of evidence does not provide for the suspicion that there was an administrative offense committed by Elene Khoshtaria. The video footage also shows a struggle of Khoshtaria with the police officers and her flashing the paint over the wall, as well as her attempts to break the cordon. According to the representative of the administrative body, the brought evidence cumulatively match each other, due to which Tamar Jokhadze requested the court to hold Khoshtaria as an administrative offender.
Following the court decision, Elene Khoshtaria was fined GEL 2,200 for the offense.

Human Rights Center is monitoring the case of Elene Khopshtaria  within the frames of the project Legal Aid and Human Rights Monitoring. The project is supported by a USA foundation National Endowment for Democracy (NED).