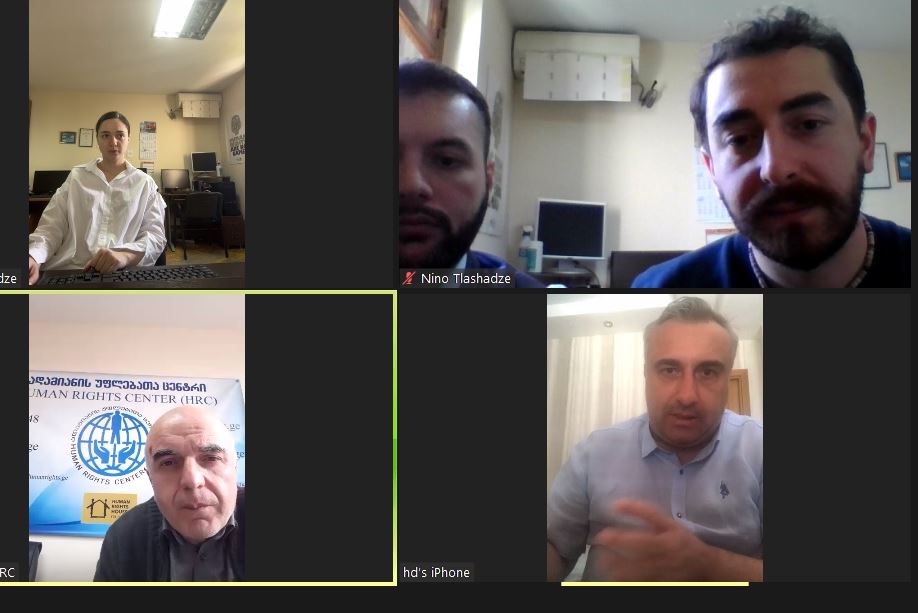 On May 11, 2022, representatives of HRC met with Mamuka Chabashvili, a defense counsel of Irakli Okruashvili, and discussed the judgment rendered by the Court of Appeals on the Criminal Case related to the events of June 20-21.

As the public is aware, the leader of the party Victorious Georgia, Irakli Okruashvili was charged with an offense under Article 225 of the Criminal Code related to the events of June 20-21, 2019, envisaging the organization of group violence and participation in the violence.  Following the judgment by Tbilisi City Court on April 13, 2000, Okruashvili was sentenced to 5 years of imprisonment being accused of participation in the offense. While the charges of organizing and leading group violence were lifted.

On  May 15, 2020, Irakli Okruashvili left the penitentiary facility following the Pardon Act issued by the President of Georgian. The decision of the President was based on two documents of agreement between the government and the opposition done on March 8, 2020.   The second document ("Joint Statement") refers to the problems in the judicial system.

The document recognizes that the "highest standard" must be observed in the justice system. The Statement points to the need to react to the improper politicization of the courts and elections now and in the future. The document refers to the authority of the President of Georgia and in this regard to one of the tools for releasing persons arrested on the basis of alleged political motives and selective justice - the use of the president's constitutional prerogative as a possibility to correct the legal problem. On March 9, 2020, President of Georgia Salome Zourabichvili said that if she considered the pardon to take place necessary, she would issue the Act or Pardon.

Irrespective of the Act of Pardon, Okruashvili appealed to the Tbilisi Court of Appeals for proving his innocence, where Judge Vepkhia Lomidze heard the case.

On April 18, 2022, Irakli Okruashvili released information on his Facebook page that the Tbilisi Court of Appeals upheld the judgment of conviction rendered by Tbilisi City Court on April 13, 2020, and sentenced him to 5 years in prison.  He did not attend the trial because at that time he was fighting against Russian military aggression in Ukraine.

According to the defense, the Court of Appeal fully agreed with and reiterated the reasoning developed in the judgment of conviction by Tbilisi City Court on April 13, 2020, right as well as the illegal grounds of delivering the judgment.

The defense disagrees with the judgments rendered by the first and second instance courts and intends to appeal the judgment of conviction on this criminal case to the Supreme Court of Georgia.

A number of legal problems have been identified in the case related to the events of June 20-21, 2019. The judgment of conviction was based on the testimony of only 4 police officers as witnesses. As a piece of neutral evidence, the video recordings requested from  TV companies and the opinion of the forensic portrait examination were presented at the trial which is problematic in legal terms. The court avoided the issue of the specific nature of the norm and without identifying and assessing the individual elements of the criminal act subsumed the act under violence whereas for the purposes of article 225 of the Criminal Code “violence” shall be defined as a more intense physical impact than under normal circumstances.

Moreover, the law enforcers chose to accuse and consequently detain particularly Irakli Okruashvili out of plenty of individuals with whom Okruashvili participated in the "group violence". Therefore, the criminal proceedings were instituted only against him, although it was possible to identify other protesters around him. Prosecuting Irakli Okruashvili in such a manner may be assessed as discrimination on political grounds. Several days before arresting Irakli Okruashvili, his driver and related person to the family, Koba Koshadze was arrested with alleged political motives.