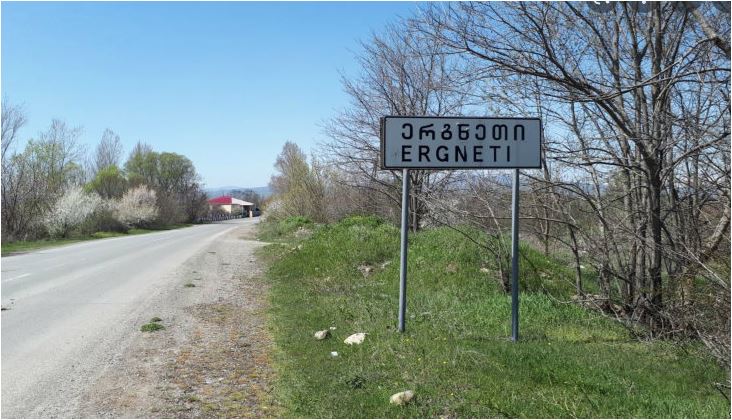 It is the 14th summer since the war of 2008. More than 13 houses in the area are locked.  A few elderly are left here and there. A Dying village: this is how  Lia Chlachidze, the resident of the village Ergneti, near the dividing line,  calls the place where she was born and where children's voices having fun could once be heard.

"War does not kill only with the bullets. Stress and hard life after the war have taken the lives of many Ergneti residents,” - she says and takes her glance at the locked door opposite her house.

The remaining residents of Ergneti say that leaving there is like living next to a powder keg:  on the one hand, they have a creeping occupation and, on the other, common life problems.

"Children are not born here anymore. Ergneti is facing a demographic disaster. 7 students graduated from the school. They will go to the city. I have seen very few people who came back,” says Lia Chlachidze.

One of the elderly men left in the village, often feeling sick, finds the outpatient facility in Ergneti mostly closed.

"The doctor comes one day per week, but she fails to arrive when there is a pandemic, bad weather, force majeure, or no transport. One day (per week) is not enough and sometimes we do not even have that one day either," says one of the elder villagers.

Lia Chlachidze believes that the residents remaining in Ergneti need special attention from the State. According to her, the elderly do not have access to basic medical care: "There is indeed an outpatient facility, but this is a cottage,  mostly made of plastic with a stove inside, thus  one must be very careful, for  in case of fire the whole cottage will burn down in a few minutes."

As she says, she will soon turn 70 and despite many problems, she does not consider leaving the village. "13 houses are closed around me. I am afraid that   I would be left alone in winter,” says Chlachidze.

The management of the outpatient facility lies with  Shida Kartli Primary Health Care Center Ltd under the Ministry of Health.  Zurab Jalabadze, the director of the center, says that the doctor can't visit the village daily. He refers to the shortage of medical staff.

"It is not possible for a doctor to be at the outpatient facility every day. There is also a shortage of staff. According to the law,  one doctor and one nurse shall be provided for per 2,500 inhabitants. I will put this problem on the agenda so that if the doctor will not be able to arrive, at least the nurse appears at the Ergneti outpatient clinic. I always try not to leave without attention the villages near the dividing line,”  states Zurab Japaridze.

The elderly left in Ergneti often in need of medical care, face another problem besides the problem of the outpatient clinic.

When the outpatient facility is closed, but medical services are needed, the population has to consider leaving for Gori, but the transport from Ergneti is rather irregular.  To arrive in Gori, they often have to wait for several hours.

"Transportation has become very expensive and not everybody can afford to travel to Gori. Moreover, the transport works without any schedule with drivers choosing their time to depart and arrive. The drivers wait till the vehicles are filled up with passengers. You may have to wait for hours. This is a disaster,“  says Nino Kasradze, a resident of Ergneti.

Besides, people have other reasons to visit a neighboring village or Gori. There is neither a shop nor a pharmacy in Ergneti,  accordingly, the irregularity of the transport makes the problem even worse.

A group of HRC was on the spot to get acquainted with the problems of the population living in the village of Ergneti. The co-director of HRC, Nino Tsagareishvili, says that during the site visit, the population spoke about many problems, including the problem of transportation.

"Transport works according to a schedule: once a day after around noon. Such a schedule is not compatible with the work schedule of the locals living there. They do not have private cars. Therefore, they are forced to ask other villagers for assistance in transportation,” states Tsagareishvili.

The movement of residents towards the villages of Gori municipality is provided by one of the private companies. The head of the company, Zaza Miruashvili, explains that the existing schedule was developed according to the recommendation of some of the population and the school management. According to Miruashvili,  he is ready to co-operate with the population of Ergneti to solve the existing problem.

"Transport works according to schedule as requested by the school principal and the population. If there is dissatisfaction, it would be good if the population chooses the desired schedule and contacts me themselves. I would contact the drivers who travel intensively on the Gori-Ergneti route and will agree on the schedule with them. The schedule would be adjusted to the demands by population," states Zaza Maruashvili.

The City Hall tried to regulate public transport in the villages of Gori municipality, but the attempt failed.

"The City Council (Sakrebulo) has adopted a relevant resolution, which provides for the issuance of passenger transport permits for vehicles selected as a result of the competition. After that, Gori Municipality announced a competition for the selection of vehicles, but the tender did not take place. Gori City Hall continues to work to resolve this issue,"- asserts Natia Mdinaradze, the head of the Public Relations Service of Gori City Hall.

The part of the population involved in agriculture is facing the problem of lack of equipment. Giorgi Kasradze residing in Ergneti says that when it comes time to plow and sow, the community becomes dependent on a  single piece of equipment.

"It is a very difficult problem because we as the farmers are hindered from cultivating the land in time. However, a part of the population earns their living through agriculture as they sell agricultural products,” Giorgi Kasradze tells us.

Mamuka Lomsadze, Head of the Shida Kartli Regional Division of the Ministry of Environmental Protection and Agriculture of Georgia, confirms that the problem of equipment is really on the agenda. He advises the population of Ergneti to form an agricultural cooperative and participate in the programs co-financed by the Ministry: "There is indeed a lack of equipment. The leasing company does not upgrade the equipment. There is a program in which the population can participate, electronically. The application must be filled out on the website of the Ministry and a co-financing of 35% will be provided. Many farmers took advantage of this program and have purchased tractors and trailers. In addition, there is a program for the purchase of the harvesting equipment, within the frame of which the farmer is financed with 40-50% of the cost of the equipment. According to Lomsadze, the population can also get a preferential agricultural credit at 3% per annum to buy equipment.

HRC implements the project Fighting against Impunity for the Crimes Committed during the August 2008 War and Persistent Recurrence of Human Rights Violations in the Conflict Areas, which will include visits to villages near the demarcation line, identification of problems, and advocacy for ways to resolve them.